History: Throw your knickers on and bang your mugs together, ‘cuz it’s Apple Beer season in America. First of all, Apple Beer is not literally apple-flavored beer and contains no alcohol. In fact, it was designed long ago by northeast German “biermeisters” for those who didn’t fancy themselves a fine ale. So what is it, exactly? According to Apple Beer’s marketing director, Ashley Simmons, “Apple Beer’s flavor comes from an all-natural blend of fruit and herb extracts” with a flavor profile designed to be “light, crisp, and dry.” It has a foamy head, like a beer, and gets its crisp flavor from the peel of the apple. Don’t expect much beyond that. We tried and were greeted with the response “We can’t offer too many details.” That’s cool. I have secrets too. But legally, I’m not allowed to share them with you. With humble beginnings in Germany, today the beverage is exported around the world, from Australia to Curaçao. Apple Beer’s American debut came in 1964 in the “Intermountain West.” In this case, that means Salt Lake City, Utah. Apple Beer still maintains its peak popularity throughout western America. For you nostalgia enthusiasts, Simmons might tickle your warm and fuzzies by letting you know that “We have always been a family-owned business.” The family business is currently in its fourth generation. If you’re on the fence about whether or not to try Apple Beer, consider this: it has won the Best of State beverage award for Utah every year since 2010, including this year. It’s designed to be an all-natural antithesis to syrupy soda and is made with cane sugar and without gluten… so you can keep your fedoras on, hipsters. “With a half-century of experience, we have become a tradition in the lives of our many loyal customers,” says Simmons. Let’s see if they’re about to score some more loyalty.

Where to get: Apple Beer is distributed internationally and, obviously, across the U.S. To find the nearest retail location near you, use Apple Beer’s locator. It’s also sold online. For singles, try Soda Emporium. For 12-packs, hit up Apple Beer’s online store. 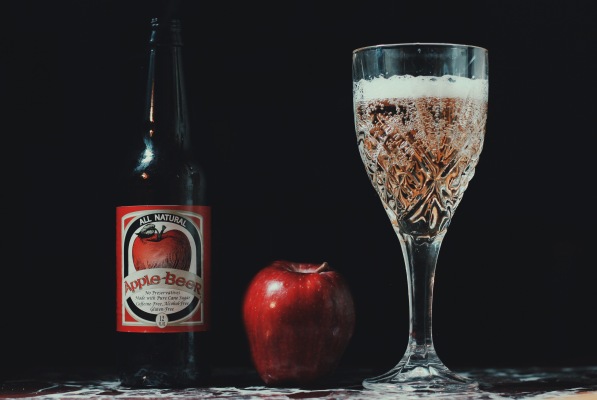 Taste: Apple; tartness; fig; raisin. First of all, no this doesn’t taste like beer or apple-flavored beer. That said, it does taste like apple, though the flavor isn’t what I’d call robust. Somewhere in the middle. Much closer to a carbonated cider than anything else, but not enough fizz to call it a sparkling cider. The apple flavor comes through in a burst at the beginning of each sip and is quickly followed by a cutting tartness that rides the back of your tongue likes surfer bros catching a wave. This is a dry beverage. The flavor profile is rounded out with notes of fig and raisin. Not totally sure where those come from. The ingredient label doesn’t list any spices, just “natural flavors,” but the fruitiness provides a nice balance to go along with the apple cider taste.

Finish: Tart apple cider that lingers for a few seconds, then fades.

Rating: Apple Beer is solid. It’s that friend you know you can count on at the end of the night to be your DD after you’ve stopped caring about how much your tab is going to be at the bar. Its flavor is unmistakably fall; it’s a crisply carbonated apple cider-esque soda you should be drinking as the leaves change color. So, of course, we reviewed it in July. Just a note: Apple Beer’s biggest season is actually summer, so I obviously know nothing. Apple Beer’s flavor also comes along with an acidic bite. Probably a little bit too much for me. I’d prefer to have seen the apple flavor increased and the tartness decreased. I also got some additional tasting notes of fig and raisin, and though I can’t place why, they were the best parts of the soda. This is definitely worth a try because it has a nice, familiar flavor that takes you straight to autumn. I’d estimate its likability will always be highest in summer and fall. In our opinion, this is cold weather soda. Revisit this in October.