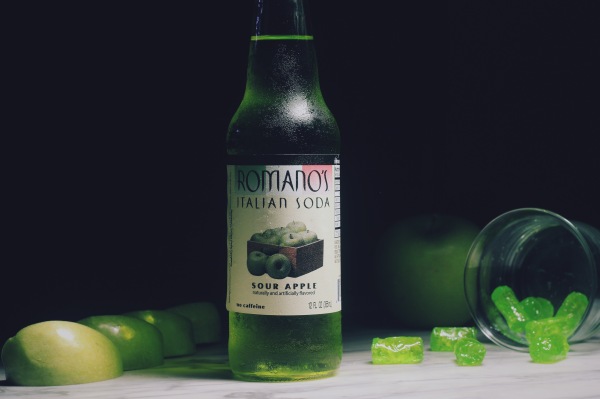 History: “It tastes good and it smells good.” Not a bad start if the words of Romano’s Italian Soda founder, Ken Pastega, are true. Pastega grew up in the soda business. He says his family worked for PepsiCo. for 65 years, owning as many as four franchises at a given time. A one-time marketing executive for the soda giant, Pastega was constantly exposed to new trends and flavors, and it was that sense for innovation that came in handy one day when visiting a coffee shop. He noticed the barista pouring hand-made Italian sodas for the shop’s customers and loved that each soda was slightly different. Well, Pastega is of Italian heritage himself. But you knew that, right? I mean, his last name is almost Pasta. He also already had all that Pepsi bottling equipment at his Medford, Oregon plant. So in 2005 in Corvallis, Oregon, he founded Romano’s Italian Soda, naming it after his Italian grandfather. When asked what makes it Italian soda, he quips, “’cause I’m Italian!” He also credits Jones Soda for being another inspiration for entering the craft soda game. All Romano’s Italian Sodas are made with pure cane sugar and no caffeine. Pastega recounts the company being ahead of the curve on the pure cane sugar soda boom, making the switch from corn syrup to real sugar in 2007. He adds, “I always liked Pepsi better with cane sugar than corn sugar.” The family sold its four Pepsi franchises in 2011. Romano’s started out in fountains at local 711 gas stations then gradually moved to plastic bottles and then glass. Today, the company makes six flavors. Pastega tells us that Sour Apple, our review here, is actually fairly low on the totem pole in terms of sales at fifth overall. But sometimes you just gotta give the lesser flavors some love. This same logic also applies to dating, ladies. And lucky for all beautiful women out there… I’m single AND I write really good reviews of soda on the Internet. Note: need to work on sales pitch. Speaking of sales pitches, Pastega made sure to let us know he wanted his sour apple soda to actually taste a little sour. A novel concept, I know, but one this flavor often misses in the craft soda market. Use Green Apple Jolly Ranchers as a comparison. Pastega says, “We tried to duplicate the feel of the candy in the person’s mouth, the smell of the candy, and the flavor of the candy.” And I think you’d be letting Pastega down if you didn’t try his soda on ice cream. Near the end of our interview, he did a solid five minutes on that topic alone. We’ll do you one better and put in more than five in on this tasting.

Where to get: Romano’s Italian Soda is mostly sold in the Northwest Oregon region. It’s sold nationally through Harry and David stores. You can also purchase it online via Summit City Soda.

Taste: Sour green apple; green apple Jolly Ranchers; lots of little carbonation. This tastes like sour green apple candy in liquid form. There’s a great balance of sweetness and tartness in the apple. It’s very similar to the flavor of Jolly Rancher Green Apple hard candy. The carbonation is light and frothy, but there’s a lot of it at the beginning of each sip that gives way to a flavorful sour apple taste on the palate. I have to say the apple flavor really captures the essence of Granny Smith Apples. Impressive.

Finish: Slightly acidic and tart green apple. The sour notes definitely show themselves more at the end of each drink.

Rating: Romano’s Italian Soda really captures what you’ll be expecting in a sour apple soda. It’s apple up front with a tart, sour candy bite at the end. The green apple flavor is crisp and refreshing, aided by the soda’s carbonation. The bubbles are light and frothy, and once they subside you get blasted with flavorful sour green apple. For a soda with such a high sugar level (45 grams), the tartness and authentic apple flavor help to keep the sweetness in balance. The tart green apple notes evoke memories of Green Apple Jolly Ranchers. It also tastes kind of like a non-alcoholic version of Smirnoff Ice Green Apple… not that this adult man… knows what those taste like. This really works on all levels. The only drawback we can think of is that it might be a little too tart for some drinkers. I’d curtail the acidity on the finish just slightly. But this shouldn’t be an issue for most drinkers. The soda’s bright green color just adds to the appeal. The flavor is robust, but probably isn’t something I’d recommend drinking fast. Savor and enjoy the experience. Romano’s Italian Soda is still a growing brand, but one that pleasantly surprises the taste buds with this flavor. You’d be silly not to try this sweet and sour soda. Pucker up.