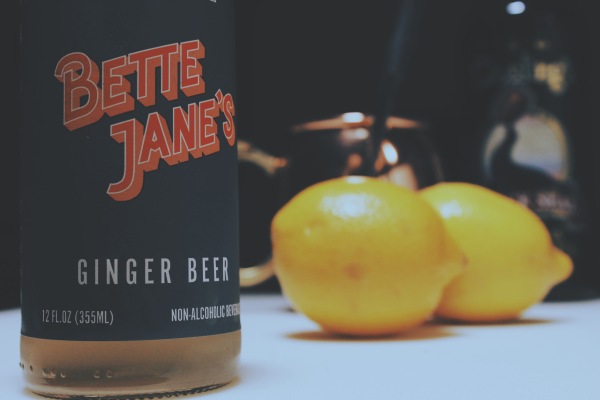 History: Kirk Pearson started making ginger beer for personal use a couple years ago in 2013. Having an extensive background in the cocktail and bar industries, Pearson just figured he could make something better than what was out there. Soon, he started testing it with friends in the industry and getting requests for use in their restaurants. So he self-taught himself how to carbonate and ferment, and voila, in July 2014, Bette Jane’s ginger beer was born. He’s still a one man show, but he’s quickly gaining a following on the West coast. The concept behind the product is a noble one. Bette Jane was the name of Kirk’s mother who passed from breast cancer when he was young. Pearson donates proceeds from every bottle to breast cancer research and those affected by breast cancer. While the ginger beer stands on its own, it was really developed to be a mixer to “carry through the cocktail.” A unique note about Bette Jane’s ginger beer: it uses lemon concentrate instead of citric acid, which gives it a more natural flavor and saves the barman the extra effort of having to add his own house juice to a cocktail. Headquartered in San Rafael, California, Bette Jane is soon set to launch a couple more intriguing products… but we’ll let them tell you when they’re ready.

Where to get: Contact Bette Jane’s directly to place an order.

Taste: Slow ginger burn; lemon. More of a tart kick than a spicy kick. Very smooth for a ginger beer, which is fairly unusual. Tastes very authentic. The use of simple, quality ingredients stands out. Most ginger beers are slightly harsh, to very harsh on the palate by design. I didn’t know how to take this at first, but it really grows on you. It’s probably too light to consistently drink by itself. But that isn’t what this ginger beer was designed for, so now we had a perfectly good excuse to … test this out with rum. And whoa. It makes a world of different. The ginger beer really let’s rum do the talking for itself while still being present enough to make you say, “Ah, there it is!” Crisp and refreshing. This does better with alcohol than on it’s own.

Rating: If you’re looking for a mixer to add flavor to your cocktail without stealing its thunder, this is your ginger beer. The bite isn’t strong enough to shock, yet is bold enough to enjoy. The mildness of the ginger makes it easy to drink on its own, but may be too light to consistently drink without alcohol. The use of lemon in this is really phenomenal and is a flavor most ginger beers completely ignore. It really makes the beverage shine. Think of it this way: by drinking a bottle of Bette Jane’s, your also helping out a good cause. Who knew you could be philanthropic and get drunk all in one fell swoop. Get a copper mug; get a Bette Jane’s and an adult elixir, and take a load off.