History: G’day mate! Bickford’s is an Australian company famous for producing cordials and craft sodas, among several other beverage-related products. After migrating from England in 1839, William Bickford and his wife Anne Margaret opened a pharmacy. Pharmacies, for those of you who don’t know, were the beginnings of soda. Pharmacists would use carbonated flavorings to disguise the horrid taste of medicine. After William Bickford’s sudden death just 11 years later, Anne Margaret took over the pharmacy business and in 1863, formed A.M. Bickford and Sons with her two boys. And so it began. In 1874, the company began producing cordials, the product it’s most famous for to this day. Craft soda came along later for Bickford’s with Lemon and Lime Bitters being its most famous flavor, followed by their cream soda and their version of sarsaparilla.

Where to get: Available widely in Australia throughout grocers and online, this means nothing to Americans. As a stone cold USA review site, wtf mate? Where can we get it? Lemme be real with you… it isn’t readily available here. BUT… but that doesn’t mean you can’t get it. Bickford’s is a large company that employs very nice people. They’ll be more than willing to be accommodating for orders. Contact them directly and they’ll work with you in getting an order out to you. And starting in June/July of 2015, the company will be doing a slow roll out in America, starting in California. 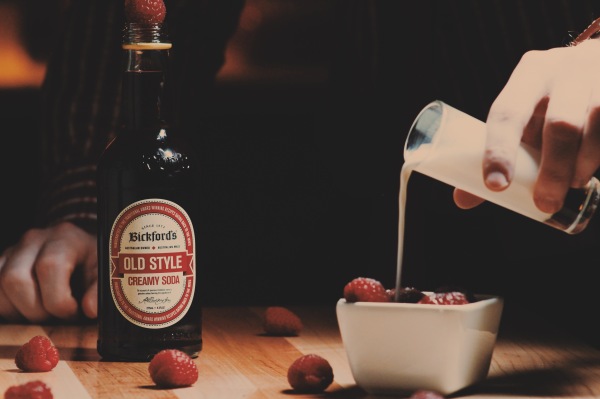 Taste: Definitely bubblegum up front, though not as strong as it smells. Then there’s a very hard-to-place flavor that follows. It makes you think. If you didn’t notice it from the photo… it’s raspberry. And it’s damn good. The carbonation is intense very briefly when you take a swig and then fades into a creamy bubblegum-raspberry twist. The raspberry comes in first and hits the back of your mouth with a nice tartness that compliments the soda’s overall smoothness. Raspberry, while not a common flavor in cream sodas, is much more common outside the U.S. So if you get your hands on this in America, you’re likely in for something new. Bubble gum, raspberry and light vanilla highlight this elixir from down unda’.

Finish: Slightly acidic raspberry that quickly fades into a vanilla-bubblegum creamy flavor and lingers on the tongue.

Rating: With its cute-as-hell 9.3 ounce bottle and its unique take on an old classic, Bickford’s Creamy Soda is a must-try. Red cream sodas are often packed with intense bubblegum flavor and loaded with enough sugar to make a diabetic pass out after just reading the label, but Bickford’s does a really nice job using their cane sugar to accentuate and not overload the flavors they want to get across. Bubblegum is a very love-hate flavor in the cream soda world and Bickford’s navigates around that by adding touches of raspberry and vanilla cream to balance it out. The result is something you don’t see often, one you’ll want to put in your mouth. Throw this on some ice and kick back. Cheers, mates.