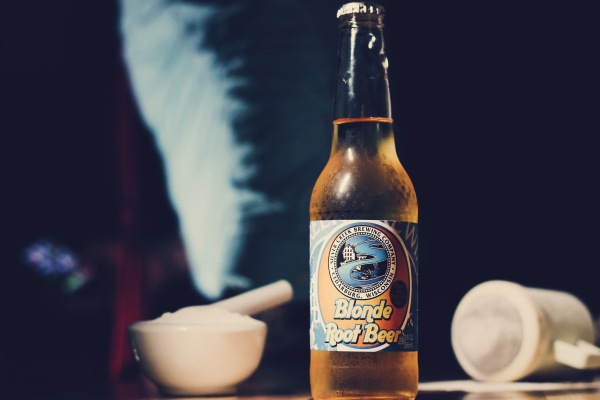 History: Bar manager Eric Halleman muses over the phone that parents often express concern about it. “Are you sure that’s not beer?” they ask. In the state of Wisconsin, craft beer ascends to its highest cultural peak in America. It’s part of life. It’s valued. People drink it for breakfast. Literally. Silver Creek Brewing wanted a non-alcoholic option that still had that beer feel, so in 2002, the same year they opened, they created their famous blonde root beer. The Cedarburg, Wisconsin brewery was actually born out of a home brewing club. I’m tellin’ you, Wisconsin = beer. He notes the brewmasters “wanted to offer a product you could drink here and it still look like a beer so you wouldn’t get made fun of by your friends.” If you look at it in a glass, you’d never know. The brewery’s blonde root beer is actually their oldest in-house beverage. They started selling it even before their beers. As for the taste, they sought something that didn’t have a traditional root beer bite, but still had “a slightly more adult taste” than a typical root beer. It’s described by Halleman as a cross between a root beer and a cream soda. And, of course, it’s made with cane sugar. We couldn’t pass that up.

Where to get: In addition to the bar itself, Silver Creek Brewing’s Blonde Root Beer is sold throughout the Milwaukee area. For those interested in placing an order for this unique root beer, contact the company directly via their Web site.

Taste: Mild root beer; crisp carbonation; light sugar. This has the bite of a cola as opposed to a root beer and leaves a little bit of a creamy cola taste, though there’s no mistaking this is root beer. It’s a little bit of a hybrid. The carbonation is tart and full of little bubbles, like a cola. Super drinkable, but its flavors aren’t exactly pronounced. It’s probably the most mild root beer I’ve ever tasted. The cane sugar is probably the boldest flavor here. A little bit of mild vanilla and wintergreen as well. I can see why some say this tastes more like cream soda, though it’s not creamy enough to earn that distinction.

Finish: Slightly creamy vanilla; cane sugar; mild wintergreen. These flavors are all accompanied by a sharp carbonation that slowly fades.

Rating: This is certainly one of the coolest-looking root beers on the market today. It’s easy drinking for a good time with your buddies. You’d have no problem downing two or three of these in a session. But its flavors could be more pronounced. Silver Creek Brewing designed their blonde root beer to have less of a bite, and in doing so, seems to have turned down the volume on root beer’s traditional flavor profiles. It takes three or four sips to really start tasting the vanilla in this bottle. When you get there, it’s good, but I want more of it. Wintergreen is a bit more prominent and the brewery does a nice job not going too far with this flavor. The slightly creamy finish is pleasing. I wish I’d get a little bit more of the that in the soda’s body. All in all, this is unique to look at, but not necessarily to taste. If you’re a root beer connoisseur, your palate may be too refined for this. Its mild flavors make it a good soda to have with a meal or with which to mix alcohol. Halleman recommends Malibu to those who choose this route. That drink gives “Blonde Root Beer” a whole new meaning. White girl status. I’ve also heard you can use this in pancakes. Not a joke. This beverage seems to be a jack-of-all-trades, but the one area it could use a boost in, unfortunately, is flavor. I’d still give it a shot for its drinkability and beautiful pilsner color. Throw a few back. Then a few more with booze. Then make drunken pancakes. You know this was already going to be your Saturday night anyway.