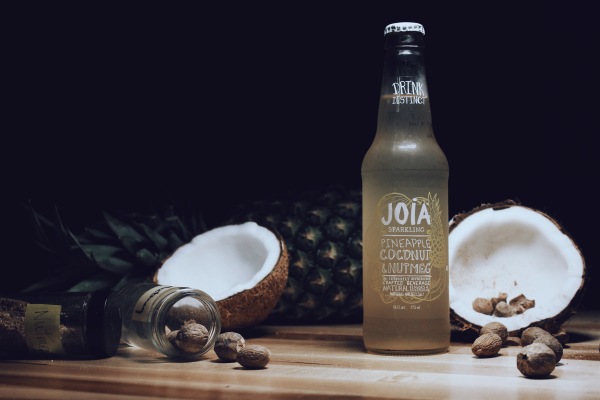 History: There is an undeniable link between the craft beer and craft soda movements. No one would debate you if you argued micro-brewed IPA’s, stouts, and lagers led to the renaissance of soda and sparked the craft and gourmet trend in soft drinks. But what about cocktails? One could argue there’s more creative wiggle room in that atmosphere and more flavors for mixologists to morph. Former Kraft and General Mills marketing executive Bob Safford certainly thought so. Now Bob Safford doesn’t drink. Still, he saw all these herbs and spices and flavors going in to unique, artisan-based cocktails and thought, “why not soda?” Well, if you want something done right… you know the rest. Not an expert an soda, Safford connected with Joe Heron, who did have a background in carbonated beverages. And in 2010, Safford founded Boundary Water Brands as a starting point to refine his ideas for a sophisticated craft soda with, in his words, “complex, adult-oriented flavors.” “For Mark, it was highly personal,” said Joia co-founder and mixologist Carleton Johnson. A year later, Joia All Natural Soda was born in Minneapolis, Minnesota. The name, pronounced “Joy-a,” was created with the intent of expressing the company’s passion and joy for their products inside each bottle. Joia launched with four flavors that were whittled down from over 100(!) recipes. Today there are six and all of them incorporate combinations of fruits and spices and are void of “preservatives or stabilizers. Nor are there any artificial ingredients or flavors.” According to Safford, the sodas are complicated to keep stable during production because they contain so many different elements. Sounds a lot my wife at the end of every month. According to the Minneapolis/St. Paul Business Journal, in 2011, BevNet named Joia the soda of the year. We chose to review their Pineapple Coconut Nutmeg because who doesn’t like to get a little tropical when it’s hot out? One thing we like about Joia is their commitment to quality. “I believe that the majority of beverages that are consumed will always be about taste and refreshment… and that’s where Joia excels,” says Safford. It’s a good start; now let’s see what our mouths think.

Where to get: To find the nearest physical outlet to you where Joia is sold, use the store’s online locator. For the rest of us, Amazon and Soda Emporium have the hook up online. 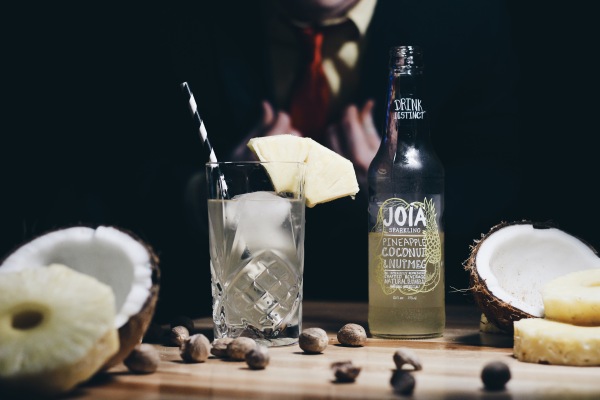 Taste: Pineapple; coconut; citric acid. This tastes like a liquid piña colada. The pineapple-coconut combo that forms the basis of most piña coladas is definitely prominent. Pineapple is up front. There’s a little bit of a bitter bite to it that I’m guessing is the nutmeg’s influence. Coconut comes next, infusing itself into the pineapple and creating that signature tropical flavor. The coconut stays long after the tart pineapple colada flavor fades and has some creamy notes attached to it. The carbonation is full of petite, little bubbles that help intensify the soda’s citric acid. The nutmeg is subtle, but you’ll take away the pineapple-coconut flavor most from Joia’s tropical elixir.

Rating: I often find myself fantasizing of lounging on the beach, staring at models, sipping on piña coladas, not worrying about my diet and letting the beads of sweat drip off me, forming a puddle of satisfaction in the sand. Then I remember it’s Monday and my 350 pound boss waddles in and pushes my deadlines up because that’s life when you aren’t on the beach. Joia must know these things. They’ve created a soda that transports you to a tropical paradise from any average setting. Pineapple Coconut Nutmeg exhibits a bold, tart pineapple flavor before transitioning into traditional piña colada and finally fading out with creamy coconut. The nutmeg is a minor player, but it adds a tartness to the pineapple and some nuttiness to the coconut. Fans of pineapple, coconut or piña colada flavors will love this little slice of bottled paradise. One area we think there could be improvement in is that tartness I mentioned. The citric acid in this is strong at some points. I think if that was toned down, the tropical flavors would shine more and the subtle flavors would be more apparent in the profile. Not everyone will be a fan of its tropical fruit flavors, but those who like fruity soda aren’t likely to be disappointed. Coconut and pineapple are both underutilized flavors in the world of craft soda, and as more and more natural sodas continue to pop up, companies will be looking to Joia as a blueprint. Drink this over ice with a straw or chilled straight out of the bottle. Hot weather is also an ideal pairing. And if you’ve had a Monday like me, throw some rum in there. Enough of those and you’ll be daydreaming of beaches and models again in no time.