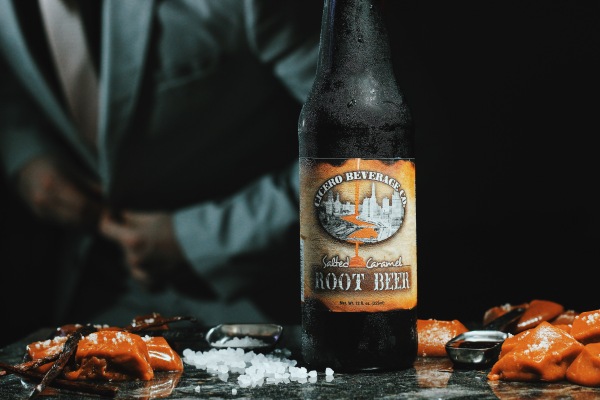 History: As children, walking into a candy store was like finally finding the right key to a door that unlocked our wildest imaginations. It was a wave of sensory overload. The vibrant colors, the endless options; it was a fantasy. Desiree Alonzo is drawing inspiration from those dreams. At the Chicago-based craft soda business, Cicero Beverage Co., Alonzo and her team try to create sodas based on the same types of things we found in candy stores as kids and today oogle at on food blogs as adults. Alonzo tells us that Cicero is trying to put dessert in a bottle while keeping it refreshing and flavorful. “I try not to get ideas from beverages because they’re probably already out there,” she explains. Cicero makes a full range of flavors, but they’re known for their nontraditional ones, most notably their salted caramel root beer.

Alonzo started her soda business in 2008, but it wasn’t until the introduction of the salted caramel root beer in late 2013 that it took off. It’s still the company’s most popular flavor today, earning a variety of accolades from competitions and bloggers. In an increasingly competitive craft soda market, Alonzo acknowledges that the company’s flavors “100% needed to make us unique.” And while the salted caramel root beer has seemingly done the job well, she confesses more importantly it gave the company confidence. Alonzo describes her prized specialty root beer as smooth with a unique caramel flavor. The secret ingredient? Salt. And while this won’t surprise most of you based on the name, it is very, very rare for a company to actually add salt to its soda. Sweet and salty still continues to be a hot trend on the gourmet dessert scene. It’s still in its infancy in craft soda. Let’s see what all the fuss is about.

Where to get: You can find Cicero Beverage’s Candied Bacon Cream Soda at Cost Plus World Market locations around the U.S. If you’re not near a physical retailer, you can also find it online at Summit City Soda or Amazon. 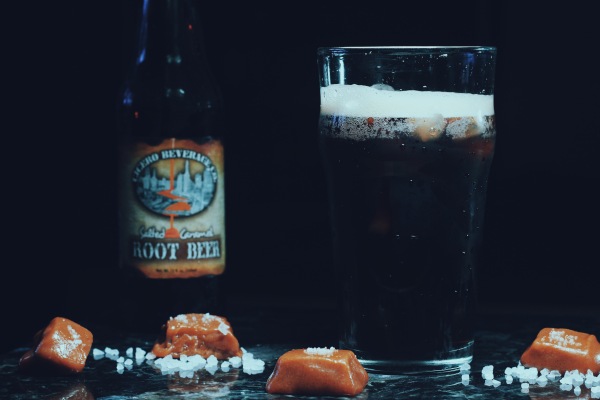 Taste: Vanilla; mild caramel; creaminess; mild maple. You’ll taste the creamy vanilla first and foremost. 7/10 on the creamy scale. The caramel follows next, quickly after the vanilla. The faster you drink this, the more the caramel replaces vanilla as the root beer’s dominant flavor. It also absorbs the vanilla’s creaminess. If you take your time in between sips, you’ll probably notice the vanilla slightly more. Interesting. What you won’t taste are two traditional root beer flavors: birch and wintergreen mint. This does not have a bite and the carbonation is mild. However, it’s also not overly sweet. Vanilla and caramel dominate the body of the soda, while a mild maple flavor permeates in the background.

Finish: Sugar and salt that transitions into bold maple.

Rating: For a sweet root beer, Cicero Beverage Co.’s Salted Caramel Root Beer is a very smooth soda. It pours beautifully with a nice head and has an optimum amount of creaminess. Creamy vanilla and caramel highlight this root beer’s flavor profile. What’s interesting is depending on how long it takes you to drink it, one flavor will stand out more than the other. The longer you wait in between sips, the more you’ll taste creamy vanilla. If you’re excitable and buzz saw through it like my uncle on a pint of Jack Daniels, the more the caramel stands out. It’s subtleties like that a craft soda drinker can appreciate. A couple other flavors also stand out, though much lower in the flavor profile: salt and maple. You taste both on the finish. The salt is barely there. If you really search for it, you can find it. The maple is more noticeable, again, notably on the finish. It’s probably a little too strong in my opinion. It has great flavor, but after a rush of vanilla, sugar, and caramel, another sweet flavor will be pushing it for some drinkers. This is where I think the root beer would really benefit from a flavor that pushes back, like mint or birch or sassafras. Cicero’s Salted Caramel Root Beer will always have its detractors for this reason, a lack of traditional root beer flavors… even though it’s not a traditional root beer. But I gotta hand it to Cicero; despite the trendy flavor choice, this is not a novelty root beer. When looking at the label and thinking, “salted caramel root beer?” many will be hesitant to try this because it is such an odd flavor choice in a root beer. But this is an enjoyable root beer I’d happily drink again and I’d encourage others to twist the cap off one. Cicero takes vanilla and caramel, two flavors more common in cream soda, and successfully incorporates them into root beer in an elegant fashion. This won’t be a root beer you drink every day, but as a drinkable dessert, it does its job well.