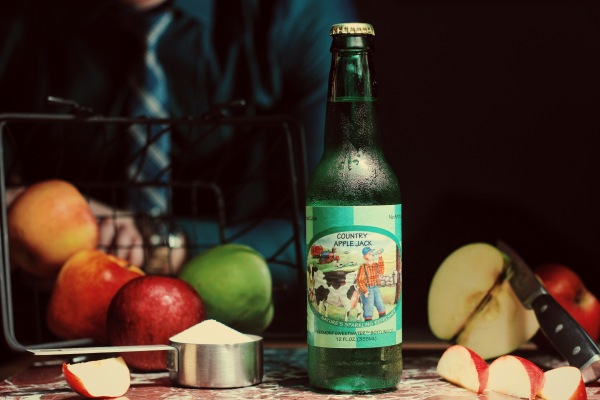 History: Apple is a vastly unexplored flavor in craft soda. It’s like the deep sea; we don’t really know how to approach it. Maybe it’s a little scary, but it can also be pretty neat. The biggest difference, I guess, would be that most of the stuff at the bottom of the ocean looks like it could eat your soul, while apple soda seems like a small blessing. Vermont Sweetwater is a small soda bottler founded in 1993 by brothers Rich and Bob Munch. The company tries to cater to the slightly more adventurous craft soda drinker. I mean, they founded the company on a carbonated maple seltzer water. Some of their flavors include Mango Moonshine, Raspberry Rhubarb, and Tangerine Cream Twister. They’re one of only a small number of companies that dared to seek out and try apple in soda. They call it Country Apple Jack, an apple soda with a dash of cinnamon. We don’t know a whole lot more about it than that so let’s get to tasting.

Where to get: You can buy Country Apple Jack or any other of Vermont Sweetwater’s sodas at the online store in either 24-packs or 6-packs, as well as on Amazon.

Taste: Honeycrisp apples; Ambrosia apples; tartness; cinnamon; sugar. This tastes like a soda your grandma made at about 6:30 after supper to be served with a scoop of vanilla ice cream. It’s got really good, authentic apple flavor. The biggest tasting note is honey, so it’s likely this was made using the flavors of Honeycrisp and/or Ambrosia apples, both rich in flavor and yielding a good honey taste. You’ll also taste cinnamon more along the backend of each sip. It’s not overly sweet, but there’s definitely enough sugar to make this feel like soda. There’s a definite tartness to this when you first drink it, but that fades with each continual sip in favor of a creamy honey flavor. The name “Country Apple Jack” seems very appropriate for this soda, as it feels like a down home, old fashioned recipe you’d encounter on a farm. Big on apple flavor with corresponding notes of honey and cinnamon and the slightest amount of tang for contrast.

Finish: Kind of a creamy apple and cinnamon thing going on. Think of the gooey inner portion of an apple pie.

Rating: Vermont Sweet Water does an excellent job of taking a soda that most will assume tastes like carbonated apple juice and rewriting the script on it. Instead, Country Apple Jack is somewhere in between biting into a Honeycrisp or Ambrosia apple and a piece of grandma’s apple pie. It has some striking similarities to Pure Soda’s Apple Pie Soda, though this is more of a spiced fruit beverage than one trying to emulate a dessert. It does a good job of living up to its name. It just tastes a little country, a little southern, even. Ironic for a soda from Vermont. Country Apple Jack is highlighted by a distinctive blend of honey and cinnamon flavors. If you’re an apple aficionado, you’ll probably taste the aforementioned Honeycrisp or Ambrosia flavors. If you’re normal like the rest of us and can’t identify specific apple flavors, just know those are the ones that have a honey taste to them. There’s also a slight tart or tang to this for contrast. It’s stronger at the beginning and fades as you drink it. I’d like to see that tartness hang around and give this more of a full-bodied flavor, something to push back a little more. On the flip side, a nice surprise with this soda is its creaminess. I’ve always wondered what an apple cream soda would taste like. This isn’t it – but it’s as close as I’ve seen anyone get. As you drink Country Apple Jack, it loses its tartness and becomes velvety in both mouth feel and flavor, similar to the inside of a pie. It’s easily the soda’s best element. Still, I see this being a divisive soda. Some will want this to be what it isn’t – a carbonated bottle of apple juice. I wouldn’t argue with you if you ranked this three stars, but I don’t see how it could go any lower than that. Personally, I think you have to applaud inventiveness, especially when it works. Country Apple Jack isn’t a soda you’ll likely put in your regular rotation, but it’s a nice change of pace that any soda lover should sample at some point.