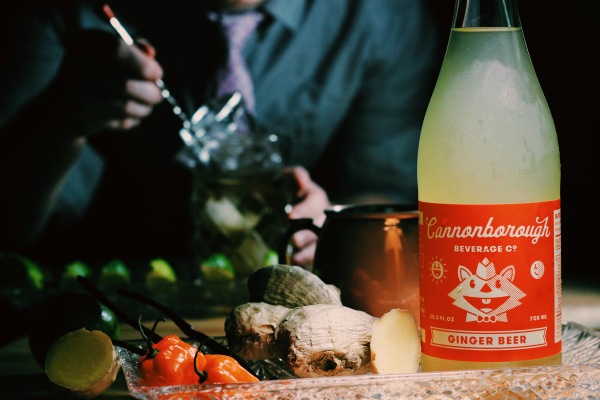 History: As craft soda continues to evolve and enter a new realm of artisanal quality, freshness is becoming an increasingly popular buzzword. And if there’s a model for fresh soda, look no further than Charleston, South Carolina where the gents at Cannonborough Beverage Company (hereby referred to as CannonBevCo) have been concocting seasonal fresh fruit sodas since 2012. These three dudes grew up together playing soccer and now they’re competing in a different arena that America actually cares about: beverages. CannonBevCo has been at the forefront of the farm-to-table soda movement since the company’s inception. To create their sodas, they get fruits from local farmers and blend a mixture that balances the sugar and acidity of the fruits. “Sometimes you feel a little guilty drinking soda. We wanted to take the vehicle of soda we loved and elevate it a little bit,” says co-founder Mick Matricciano. But it’s their methods that really set them apart. The company uses the same equipment used to brew craft beer. A couple of them actually got their start in the bar scene mixing cocktails, a trick of the trade that’s come in handy when crafting recipes for their soda using fresh fruit and herbs. CannonBevCo is also one of the only soda bottles in the nation that uses force carbonation. Let me explain this to you like you’re an eight year-old. They blast CO2 into their liquid, which bonds with water, and when the CO2 dissolves you get bubbles. I get that a few of you still didn’t get that. It’s fine. One of you is probably an ex-girlfriend of mine. A more recent innovation is finding a way to keep their soda shelf-stable without the use of preservatives by using bottle pasteurization. It’s a method more commonly used with other juice beverages like ciders. Matricciano likens it to canning jams.When they’re not making soda, they’re winning awards for the soda they already made. Recently CannonBevCo was awarded “best beverage in the south” by Garden and Gun, a southern United States travel, food, and culture magazine.

CannonBevCo specializes in sodas using real, local ingredients, meaning most flavors have a limited seasonal run with the exception of Grapefruit Elderfower, Honey Basil, and Ginger Beer. Those are year-round. You’ll notice one of those flavors doesn’t sound like the other. For those of you who need some help: ginger beer is a very common flavor of soda and often utilized in cocktails. That was actually the appeal of making the ginger beer. “It’s a classic style,” says Matricciano, before adding that ginger beer gave the guys the chance to show them “working within the box” as opposed to their more artisanal offerings. This is a ginger beer recipe with ingredients you’re not used to seeing. In addition to real ginger juice, the company uses lime juice instead of lemon juice in addition to vanilla beans, cloves, and habanero peppers. Matricciano explains “We wanted ginger to be the main attraction of the soda, but use the clove and vanilla to soften it.” He adds that the cloves provide a warmth to the flavor, while the vanilla helps prolong the ginger’s flavor. They also chose lime over lemon juice because they felt like ginger’s flavor was already aggressive enough and that adding lemon would overdo it. That idea sounds frighteningly like my love life. CannonBevCo’s ginger beer was designed to be used both as a mixer and a stand-alone soda, something many ginger beer brewers don’t take into consideration. The thought of a ginger beer made with vanilla certainly has us intrigued.

Where to get: CannonBevCo Ginger Beer is available in bars, restaurants, and cafes throughout South Carolina. You can also order their sodas in 750ml bottles for $10 + shipping at their online store.

Taste: Lime; vanilla; ginger; mild heat. Let’s start with the basics – this tastes good. Surprisingly, you taste lime right off the bat. It’s a softer lime, blended with notes of vanilla. You can taste the real lime juice Cannonborough used and it’s a refreshing flavor. Definitely not too acidic, which is nice because the ginger comes in next and it has a lot of flavor character. The ginger flavor is crisp and has a little heat to it, but the real burn comes from the habanero pepper in this – and that’s what you taste near the end of the sip. I’d give this maybe a 6.5/10 on the heat index. The lime provides a nice citrus contrast to the ginger. There’s equal parts harmony between the ginger, lime, vanilla, and spiciness. Easily one of the most refreshing and flavorful ginger beers we’ve ever tried.

Finish: Lingering pepper-like heat that you feel on the back of your tongue and in the throat. Maybe some herbal notes in there as well, which is most likely the clove used in this recipe. The habanero heat slowly fades and the lime juice and vanilla bean flavors remain. Really nice.

Rating: We used to say that root beers were a dime-a-dozen in craft soda, and they are, but you can make the same argument for ginger beer now. 2015 was the year of ginger in soda. Unfortunately, many companies are now making ginger beer just to say they have the flavor in their line with little regard for making a unique product. It’s refreshing, literally and figuratively, to drink this one in. CannonBevCo perfectly walks the line of “natural” and “classical” sodas when it comes to taste. Their ginger beer is a prime example. It’s made with real ginger juice, lime juice, vanilla beans, and habanero peppers, while simultaneously being sweet enough to taste good. So often “natural sodas” are like when dudes hit on girls out of their league – admirable in their inspiration and unenviable in their execution. It usually comes down to sugar content. Natural sodas are often earthy in flavor and taste more like a flavored carbonated water than anything else. They usually sacrifice taste for lower calories. Cannonborough pulls off a nifty trick with their ginger beer, coming in at 90 calories/12 oz while still being packed with flavor. Oh yeah… we should probably talk about the flavor more. First and foremost, everything tastes real and fresh. The use of lime juice in CannonBevCo’s ginger beer is alarmingly good. It pairs well with the sweetness of the vanilla beans for a soft vanilla-citrus combination, and also provides a nice citrus contrast to the ginger. The heat on this is right where it needs to be. Strong enough to make an impact, yet not so fiery to distract from the ginger, lime, and vanilla flavors. I even think they could turn the heat up one more level and still be fine. But that’s a personal preference thing. I think what really makes CannonBevCo’s ginger beer stand out is the use of vanilla. It’s very uncommon in ginger beer, yet extremely common in most soda. Sometimes the best ideas don’t fall far from the tree. This is undoubtedly one of the best ginger beers available in America – crisp and refreshing, full of citrus with notes of pepper, and anchored by a perfectly executed use of real vanilla. This ginger beer is out of your league. Fortunately, if you throw a few bucks her way, they’ll let you have a go with her.