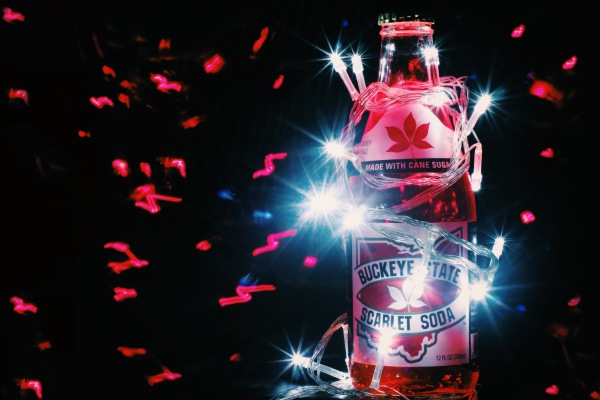 History: Ready for the most pro-Ohio soda you’ve ever come across? Scarlet Soda by Buckeye State Soda glorifies the state. We’re not kidding. They take it very seriously, saying “It celebrates the great state of Ohio which has given so much to the world and changed the course of history.” I haven’t had that much pride in something since I built my dog an igloo out of Legos when I was eight. He ate a lot of them. It was an expensive vet bill and that was the last time I played with Legos. Scarlet Soda is truly a bottle of red mystery. There’s no flavor listed. So we reached out to the company to try to figure out what we were getting ourselves into. Buckeye State Soda CEO David Wolfenberger tells us “Everyone has a different idea of what it tastes like. We think it ‘Tastes Like Victory’.” So… we didn’t find out anything about how it tastes. He did divulge to us that “it is not a red cream soda,” so there’s that. Basically, this is a “decide-what-you-think-it-is” soda. In somewhat concrete terms, Wolfenberger calls it “an old style red fruit soda flavor.”

Scarlet Soda was created in the fall of 2015, but the history behind the company dates back a lot farther. The real name of the business behind Scarlet Soda is Root Naturals located in Cincinnati, Ohio. The company produces root beer, cream soda, and black cherry under that name using “all natural botanical extracts,” according to Wolfenberger. They operate under the name Buckeye State Soda only when selling one product: Scarlet Soda. Confused yet? Back to the history lesson. It was 1937 when Deno Spaccarelli opened his first apothecary in Cincinnati. For those that don’t know, an apothecary was basically an old time medicine shop. They also often sold fountain sodas as a way to mask the awful flavor of the medicine. So while Scarlet Soda is still relatively new, the inspiration behind Root Naturals as a company dates back much further than 2015. Be prepared for an experience. Wolfenberger sums up Scarlet Soda saying, “People either love it and evangelize it or they they think WTF.”

Nose: This is strawberry. No doubt. It’s like an artificial candy strawberry scent, reminiscent of strawberry Sour Punch Straws without the sour.

Finish: Tangy fake strawberry flavor that fades quickly and leaves a bit of a film in your mouth.

Rating: We’ve solved the mystery of Scarlet Soda. Maybe. Probably. I think? This soda is chocked full of artificial strawberry flavor. Oh, and sugar. Lots of sugar. Drink a whole bottle of this and you might be able to lift a car. Kids, do not try this. But if you do and succeed, please post a video and give us credit for the idea. Ok, here’s the thing: I know reading that a soda tastes fake and full of sugar sounds bad, but Scarlet Soda is solid. You just have to be in the mood for it. Scarlet Soda has that old fashioned candy strawberry taste one might find at a state fair. This is a soda tailor-made for children. It likely drinks best on a hot day outside. No, I don’t think a ton of adults are going to be into this and I think its audience is limited. Yes, it’s really sugary, probably too much so. Still, there are going to be people who appreciate this. It’s worth a shot. Try one while you’re barbecuing or use it as a mixer with vodka and maybe some bitters. Because the more I try this, the more I enjoy it even the though soda snob in me is telling me no. Seems like an appropriate response for a soda designed to make the drinker think.

P.S. We only had one bottle of this, so we had to take photos before tasting. We guessed on the cherries… we were wrong. At least they look nice though!