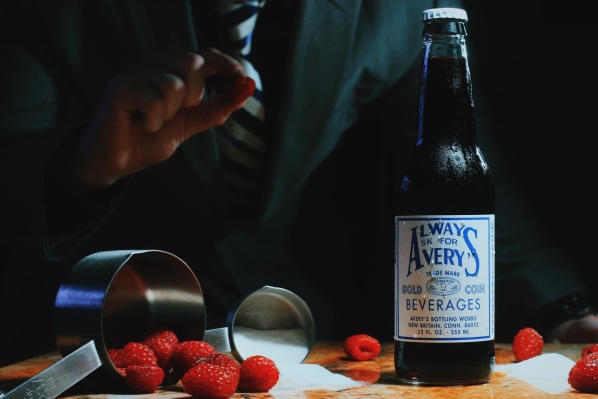 History: “Starting a soda company back then was kind of like starting a .com right now. It was just a very trendy thing to do,” confesses Avery’s Beverages General Manager, Rob Metz. And when he says back then, he means back then. Avery’s has been brewing up soda the old fashioned way in New Britain, Connecticut since 1904 when Sherman F. Avery founded the company. Dude was actually a milk peddler before he hit it big with soda. Ridin’ dirty on his horse, Sherman the milk man. That could be a Kanye West lyric and still be better than most of the stuff on his new album. Ahem. Avery’s still uses artisan well water in their sodas. That should give you the warm and fuzzies if you get nostalgic about glass-bottled soda. And P.S. they make a ton of them. From normal flavors like birch beer and root beer to oddities like Toxic Slime and Monster Mucus, Avery’s has over 40 different flavors of your favorite fizzy drinks. If there’s a flavor you like, they probably make it. Out of all the concoctions they brew, we had to pick a unique one, so we went with black raspberry. What’s the difference between a red and black raspberry besides color? I dunno man, I’m asking you! Avery’s isn’t even sure themselves. Metz admits the soda came before his time with the company, so he can’t list a ton of differencea between the two berries. He likens the flavor to huckleberry. Metz credits the company’s loyal fan base as the reason they’re still in business today. “We’ve got the authenticity that lot of the newer folks in the craft soda industry might not have,” something that without question appeals to a large portion of their target audience. It’s cool to be retro right now. Remember that when we’re begging you for quarters on the street in two years.

Where to get: Avery’s soda can purchased purchased throughout the U.S. online from Vintage Soda Company. If you’re a retailer looking to sell Avery’s Black Raspberry in your store, contact Homer Soda Company for a wholesale or large order. The company also fulfills orders directly, but you’ve gotta contact them the old fashioned way via phone or email. 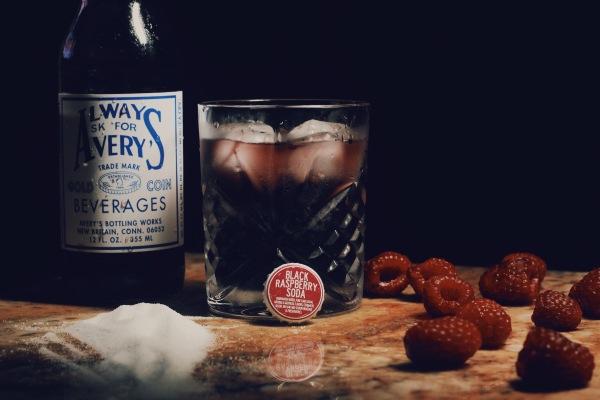 Nose: An interesting smell, kind of a combination of grape, raspberries with sugar on top, and a raspberry Sno Cone. Definitely raspberry forward, but more floral than a typical raspberry scent.

Taste: Grape; raspberry Jolly Rancher. This is more straightforward than I was expecting based on the nose. I have to say that this is surprisingly strong in grape flavor. More than raspberry. The grape taste is subdued. It’s like drinking a Grape Nehi, except right as the flavor is about to crescendo, it stops and you never get any signature tasting notes. This is void of boldness. Instead it falls off into a very subtle Jolly Rancher blue raspberry that lacks a bite. Kind of like someone took the tartness out. It’s a really smooth drink and soft on the palate, but the flavor isn’t as bold as you might be expecting.

Rating: Mild grape tinged with the tiniest bit of raspberry Sno Cone. Most will probably taste only the grape.

Finish: For a soda labeled “black raspberry,” this tastes remarkably like a more subdued version of grape soda. The soda’s biggest selling point is its smoothness. It goes down incredibly easy. You could drink two of these in a sitting, easily. However, this is partially due to the fact that its flavors are very mild. The strongest element in the soda is the sweetness, but give credit to Avery’s; it isn’t overpowering. If you handed a bottle of this to someone without a label on it, my guess is they’d probably just guess it was grape soda. And it’s not a bad take on grape soda… but this isn’t grape soda. I was hoping for a big note of raspberry with perhaps some extra sugar. I remember picking black raspberries in my grandma’s back yard as a child, plucking them right off the bushes and into my mouth. They had an earthy sweetness to them, but overall have less flavor and less tartness than a regular raspberry. This is where Avery’s missed an opportunity with their take on black raspberry. None of those elements are present. You’ll taste mild grape with a soft raspberry Sno Cone flavor near the end of the sip, so at least there is some variance to the flavor profile. The taste is simple and pleasant, but it isn’t what’s on the label. If you’re in the market for a highly drinkable, mild take on grape soda with a little flavor variance near the end of the sip, then you’ve literally hit the jackpot. If your favorite fruit is raspberry and you’ve had a rough day at work and all you want is a carbonated raspberry beverage before downing a bottle of wine and having a good cry in the bathtub… then this isn’t for you. I have to stop airing my personal problems out on here. Luckily, Avery’s has like 45 flavors for you to try. We’ll keep searching until we find the magic one(s). 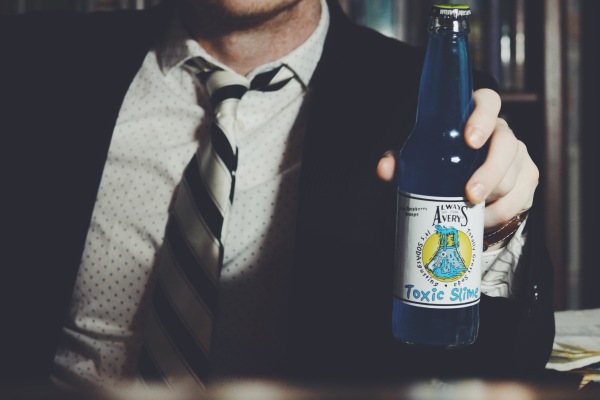 History: Avery’s Beverages is a stalwart in the craft soda community. These dudes have been making the stuff for over 100 years out of New Britain, CT. They’re known for variety. They produce almost 50 different flavors from root beer to mint seltzer to black raspberry. They also utilize artisan well water in their sodas. I see you nodding your head in approval, even though you don’t really know what it means. Avery’s credits a “great local following” and the resurgence of craft soda to their maintained success. But there’s also another reason. A more disgusting reason. In fact, it’s why we’re here today. But first a lesson: Avery’s runs a “Make Your Own Soda” program on Saturdays where kids, by appointment, are allowed to create sodas based on six stock flavors. As you can probably guess, with a child’s excitement and mind running 1,000 mph, a lot of the early versions came out sludge brown. The kicker was… some of them tasted good. Eventually they worked with the kids to perfect a flavor called “Swamp Juice.” Out of this, Avery’s “Totally Gross Soda” line was born, featuring names like “Zombie Brain Juice,” “Kitty Piddle,” and today’s soda for review, “Toxic Slime.” As Avery’s Beverages General Manager, Rob Metz say, “They appeal to the 10 year-old in all of us.” Ah, nostalgia. According to Metz, 80% of the soda Avery’s ships is this weird stuff. Be on the look out for future flavors like “Alien Snot” and “Worm Slime.” You hungry? Or is it just me?

Where to get: Avery’s ships all over the country. You can probably find it at your nearest retro soda shop or at RocketFizz outlets. Some of their biggest distributors include Homer Soda in the midwest, Bay’s Best Beverages on the east coast, and Real Soda (don’t mind the Web site; he’s legit) on the west coast. Or you can always contact Avery’s directly and they’d be happy to make an order for you. 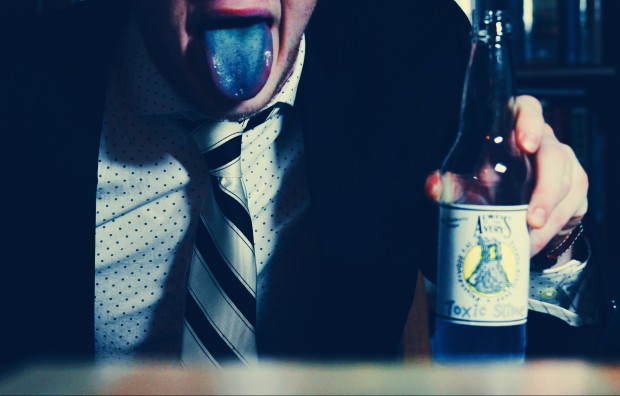 Taste: Artificial blue raspberry that crawls up the back of your sinuses. This tastes like something to which you’d have an allergic reaction. As with most craft sodas, Toxic Slime only contains a handful of ingredients, including pure cane sugar, but it reeks and tastes of chemicals. With a name like Toxic Slime, maybe Avery’s accomplished what they wanted. It’s supposed to be blue raspberry-orange, but it comes off more like sweetened Windex. The orange doesn’t really come through and the blue raspberry isn’t crisp or palatable enough to make you want to drink this repeatedly. Nothing complicated here, just the taste of sugary, watery, artificial flavorings.

Finish: Sugary; fake blue raspberry that leaves you feeling unsure about yourself.

Rating: This soda will turn your tongue blue and your organs into sadness. The color is fun. The name is fun. The flavor combo in theory is even fun, but this doesn’t work. This is a novelty soda along the lines of Lester’s Fixins, though admittedly, it’s better than most of those. Parents, pick up a bottle of this for your kids. Let them turn their tongues blue. If you’re into novelty soda, give it a go. If you’re in it for the flavor, pass on it. If you’re in it for a go round at the hospital, get a six-pack. I fear what color my insides are now.