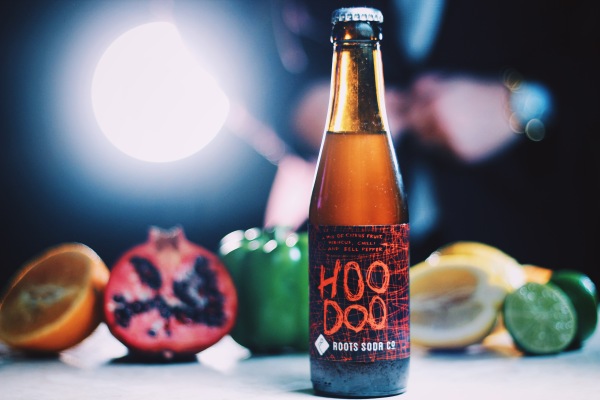 History: As soon as you hear the first chords of the Muse song “Hoodoo,” there’s an entrancing vibration that echoes your down your spine… but more importantly, there’s also a sense of dread. Like peering into an ocean blue sky before looking off in the distance and seeing a dark wave of clouds barreling forward. Middle Eastern-inspired guitar strings pluck quietly, conjuring up the image of a quiet dessert before the song quickly descends into a rapid, more folksy rendition of itself. Lead singer Matt Bellamy calmly croons about for half the song until the music then trades in its exotic flare for one that’s angrier, churning ahead with distorted guitars and sinister orchestral strings. The song shares the same name with an original creation from Roots Soda Co. in Edinburgh, Scotland. And much like the flow of the music, Roots founder Mark Pool describes Hoodoo the beverage as “Jekyll and Hyde, a split personality that would refresh and then burn.” The story is also the inspiration behind the beverage. He likens it to a fruit punch which is an interesting comparison to us after previously reviewing one of the company’s other sodas, Kaleidoscope, one we felt also tasted like a fruit punch. There’s more parallels to the Muse song too. The two share similar cultural influences. Pool says Hoodoo was “inspired by far eastern and South American drinks.” But there’s another, more important influence on the company’s creations. Roots Soda Co. prides itself on using real ingredients in their soda. They acknowledge and agree with the backlash against a majority of soda on the market. Pool is frank, saying “Soda is going to have to change and artificial sweeteners are not the answer. We started out wanting to make our sodas more healthy that what was on offer.” He hammers the point home, adding “The landscape of soda is one of ruin.” Damn, man – tell us how you really feel. Well, he did. And Hoodoo was his first answer.

“It took months” to perfect Hoodoo, a soda with a bevy of ingredients that make you wonder how the recipe will work when they’re all combined. Pool tells us the soda contains orange, lime, lemon and pink grapefruit juices in addition to pomegranate and chili peppers. That was the reason for the delay. Pool struggled with balancing citrus and heat. “I wanted the burn to come on slowly so that the soda first cooled and refreshed, and let you taste all of the ingredients before the burn started to build,” he says. He’s since mastered the level of heat he desired, but still faces battles with every batch of Hoodoo. Again, it’s the pepper that causes Pool to sweat. “The chillies come from different parts of the world throughout the year, and the heat from them can vary. Just like cooking a meal at home, we have to taste and adjust cooking times for the chillies in the syrup, in order to get the heat just right in every batch.” As with many sodas from Europe, the portion size is slightly smaller than the usual 12 ounces Americans are used to. But what the bottle lacks in size, it makes up in personality with its menacing red label and poetry inscribed on the back. It’s clear the crew at Roots Soda Co. have worked hard to make their sodas an experience from the names to the ingredients to the aesthetics. The only thing we all really care about though: the flavor. So here’s to the Jekyll and Hyde of sodas. It’s been a long time since I’ve tasted a split personality. At least three or four girlfriends ago.

Where to get: Roots Soda is only sold at physical locations in the United Kingdom. Sorry everybody else; you’ll have to travel for this one. But if you’re in the area, here’s a list of where to find the goods. The company also hinted online sales may be coming, so always be on the lookout.

Nose: Smells kind of like a fruitier version of V8 juice. Some savory vegetable and sweet fruits stirred together in a pot .

Taste: Juicy; pepper; orange; chili; lime; tangy. Each sip of Hoodoo reveals something a little different. Initially you might taste the chili, making the soda seem more savory. Then on the next sip, the orange comes through to make it seem more fruity and sweet. Try it again and you might notice the lime or pomegranate most, giving the soda a tangy characteristic. I’d say orange is the soda’s base flavor with chili and lime being tied for second most prominent. It really is kind of a split personality drink. Sometimes it’s more like a semisweet, vegetable-influenced juice cocktail. Sometimes it’s almost like a citrus fruit punch. But the reality is that Hoodoo is somewhere in the middle, both savory and sweet. Refreshing, yet atypical.

Finish: More savoy than sweet with notes of bell pepper and chili being most prominent and just a tinge of sweet and sour lemon, as well as orange.

Rating: So often we get asked for soda recommendations with the qualifier, “something not too sweet.” Hoodoo has shot up to the short list of sodas meeting that requirement. It’s a hybrid between a botanical and sweet soda, while getting its flavors from real fruits and vegetables. Some sips are rich, even savory with notes of bell pepper and chili. Others are sweet and juicy with a base of orange juice supported by tangy pomegranate and lime. It seems to change each time you bring the bottle to your lips. Even the degree of the flavors are different. Sometimes the pepper taste is subdued. Other times it’s vicious. Sometimes the orange flavor is juicy and upfront by itself. Other times it’s just a supporting player in the background as pomegranate and lime take over. Split personality. I’m not even talking about my exes this time. These two words define Hoodoo. And it’s clearly by design. And in that sense, Roots Soda Co. has certainly succeeded. The company is one of Europe’s best craft soda bottlers. If you’re looking for something truly out of the box, something unpredictable, give Hoodoo a try.