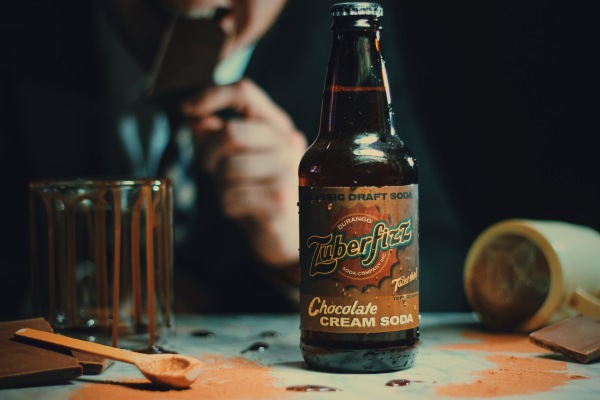 History: In Colorado, a deep breath will net you lots of scents. Smell that mountain air? The fresh clay under your boots? Maybe, just mayyyyybe a little pot? Colorado is an olfactory orgasm. But it’s also a mouthful, literally. The state is full of tons of great craft beer and craft soda. But the one with the weirdest name is undoubtedly Zuberfizz, founded by former Colorado State roommates Banden Zuber and Dan Aggeler. And the brand actually has ties to both craft beer and soda because before going completely nonalcoholic with their business, the two had planned on opening a brewery. In fact, if they hadn’t purchased the equipment to make beer, they wouldn’t have been able to make soda. The duo opened the business in 2002. By then Colorado had become flooded with breweries, but craft soda was still ripe for the taking. Zuberfizz produces eight flavors. Perhaps the most inventive is their newly renamed Chocolate Cream Soda. Originally, it was called “Coco Fizz.” The soda’s recipe was created by Zuber as a sales pitch to Rocky Mountain Chocolate Factory in order to gain the business of a big client. Rocky Mountain Chocolate Factory is a gigantic company. According to Zuber, they have over 300 stores. And in his own words, “they loved it;” a partnership was born. Now, back to the name change thing. It’s a relatively new occurrence, so new that as of July 2016 Zuberfizz has yet to actually change the name on their website. To be clear, Coco Fizz and Chocolate Cream Soda are the same soda; the recipe has not changed. The only difference is the label. Previously, Coco Fizz used the Rocky Mountain Chocolate Factory logo on the front of the bottle and didn’t look like the rest of the Zuberfizz’s soda labels. The company simply changed the name and label for consistency. As for the flavor? Zuber deadpans, “Tootsie Roll. Two words.” It’s hard to get much dialogue out of Zuber, but after a brief pause he adds, “People either love it or they hate it.” Sounds about right for chocolate soda.

Where to get: Zuberfizz sodas are most prevalent in the Colorado and four corners region, but you can always buy it online directly from the company. Don’t be alarmed if it’s still called Coco Fizz on some websites that haven’t updated the name – again, it’s the exact same recipe. You can also buy the soda online from Summit City Soda in 12-packs and Soda Emporium in single bottles. 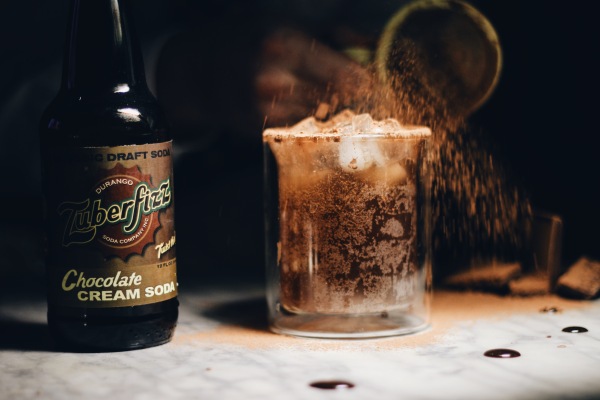 Taste: Bold chocolate; mild creaminess; chocolate hard candy; Tootsie Rolls. It’s almost jolting to taste chocolate in a soda because it’s so rare, but this is full of chocolate flavor. Imagine a chocolate breath mint stripped of the mint. That’s the best way to describe the flavor. I’d also say there are some additional undertones of cocoa. Slightly creamy, ala eating a Tootsie Roll. The bigger the sip, the more creamy the soda seems to be, particularly near the end. But overall, it’s overwhelmingly more chocolate than chocolate cream.

Rating: This is chocolate soda. And damn, it tastes like it. In a category where membership is limited, Zuberfizz tried to plant their flag deep in the ground with a soda full of rich, chocolatey flavor. You taste a milky, hard candy chocolate flavor mixed with sweet cocoa notes. When it comes to the creaminess, don’t think along the lines of traditional cream soda. It’s more like the creaminess of chewing a Tootsie Roll along with the flavor too. And that part of the soda is where it excels most. I have to give Zuberfizz credit: this is definitely chocolate cream soda. There’s no denying the authenticity of the flavor. That said, it’s a little harsh for me. All that concentrated flavor is a lot to handle in soda form. It’s a sipper for sure. Imagine the hip hop Gods somehow managed to concentrate the power, boldness, and sassiness of Nikki Minaj in a 12 oz. bottle. Now imagine what would happen if she got out. That’s what I feel like when drinking this. It’s powerful. Note: this is not a sexual reference toward Nikki Minaj, but Nikki if you’re reading, I’m single. Where I think Zuberfizz’s Chocolate Cream Soda could really improve is its carbonation. It’s a cream soda, so to convey that more, I’d make the carbonation frothier than it is in its current form. Fans of chocolate simply can’t pass up trying this. For everyone else, it’s a wild ride if you’re up for the challenge.