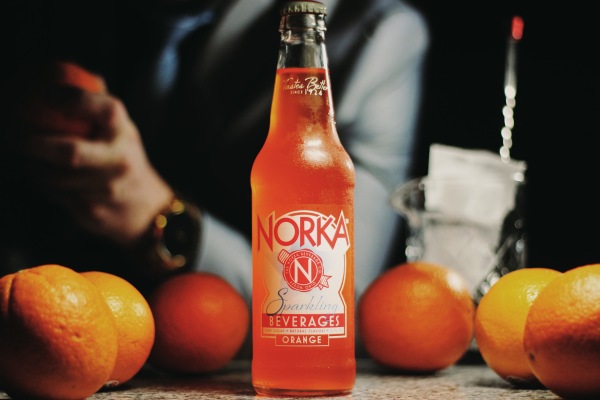 History: I recently had a conversation with a friend about her haul from a popular midwest craft soda store. “I got one that was blue, one that had a cat on the label, and one with a really cool bottle shape,” she said. Michael Considine would turn over in his grave if he was sitting with us. Considine (who is actually not dead, the previous phrase just seemed fitting) is the owner and founder of Akron, Ohio’s NORKA Beverage, a brand with roots all the way back to the 1920’s. The company’s old tagline was “tasting better” and Considine says his goal is to keep the current version of the company in line with that same mentality. For NORKA, it’s not about fancy labels or gimmick flavors; they care about the flavor of the liquid inside the bottle. “Craft soda is such a unique industry full of passion and pride,” says Considine. He’s not wrong, but you could also throw in a third word: nostalgia. And NORKA epitomizes nostalgia to the fullest. The brand originated back in the 1920’s when local soda bottlers were more common than craft beer brewers. NORKA comes from Akron, Ohio. If you didn’t notice, the brand’s name is A-k-r-o-n spelled backwards. Don’t face palm, most of us didn’t realize it either. The company existed until 1962 when it liquidated and disappeared. Its rebirth happened totally by chance. Considine recalls having lunch with his father and seeing an old bottle in the restaurant. “I had no idea Akron had its own soft drink…. It was a cool opportunity to bring something back in the beverage industry” he says. Considine went as far as to research the company’s original labeling designs and ingredients lists. In 2015, NORKA was born anew.

Orange soda is a classic in the industry, yet it’s probably the flavor most overlooked in the NORKA Beverage line. The company is famous for its cherry-strawberry flavor, but according to Considine, orange is its most “refreshing” soda. He tells us that instead of creating a soda with a candy orange flavor like others, NORKA “wanted to return to natural orange taste that’s crisp, refreshing and light.” He added that it was equally important for the soda to not feel thick or have a heavy aftertaste. NORKA orange soda contains no caffeine, like all of the company’s flavors. The company also uses natural flavors in its recipes along with cane sugar and no gluten. Personally, it feels like orange soda is one of the classics that has kind of fallen by the wayside. It’s not going anywhere, but it’s not really advancing. Brands would rather make flavors that cross flowers and fruits or something savory and something sweet. So it’s nice to see a newer (older?) brand sticking to their guns and honoring a flavor that all of our grandparents grew up drinking.

Nose: A dead-ringer for Sunny D. Uncanny. Have to say this definitely smells artificial, despite the company’s rep for using natural flavors. Hopefully it’s just the smell. 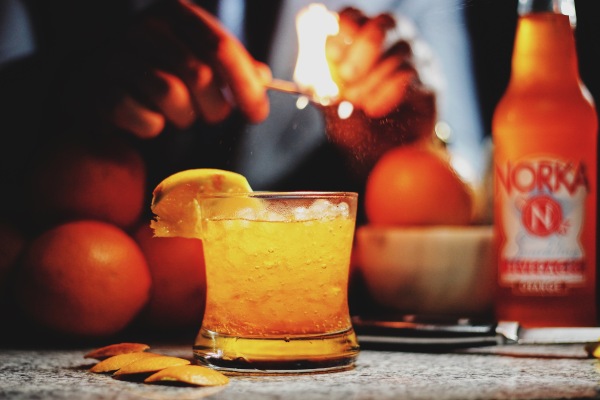 Taste: Big orange flavor, bold, mild zest, Sunny D. The orange flavor here is unrelenting. It’s closer to the Sunny D (only carbonated) taste you were used to as a kid as opposed to a retro orange soda like Slice. It has a light mouth feel, but is bursting with orange flavor. Maybe even a little bit of a San Pellegrino influence here too, but this really reminds us of a carbonated Sunny D with bolder orange notes, and as such the taste definitely has an artificial twang to it.

Rating: When you think orange soda, you probably conjure up images of Sunkist, Fanta, or maybe something like Crush – NORKA orange soda is like none of those. Instead, think of this flavor as a smarter, distant cousin of Sunny D. It boasts a strange combination of bold, authentic orange oils and childhood, artificial orange drink flavors. It’s light. It’s easy to drink. And it has one of the most sensational finishes in an orange soda we’ve ever tasted. But the development of the soda definitely doesn’t have what I’d consider to be a “craft” soda flavor. There’s something off here. It’s too close to Sunny D. Remember that friend in high school that hung out in your group, and no one really had a problem with them in the halls… but you definitely weren’t inviting them to the party? Yeah… that’s what NORKA orange soda is like. It’s friendly, it’s drinkable, but I probably wouldn’t put it in my top three orange sodas or stock it in my fridge. Still, it’s worth a shot just for the creamy, buttery orange notes that come through at the end of each sip. It’s a safe bet, but likely won’t blow you away.