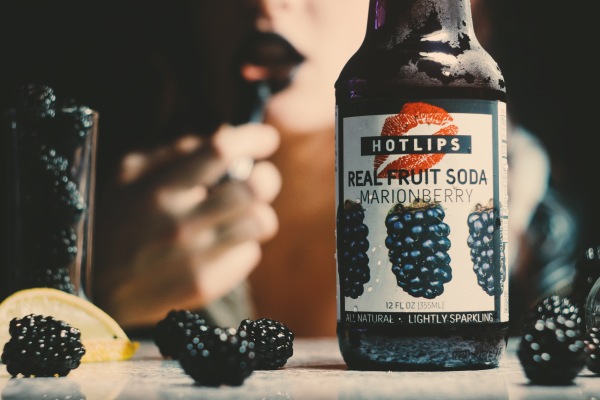 History: As I dial up Hot Lips‘ corporate offices in Portland, Oregon, I am greeted by the most soothing, gentle Australian voice in my life. Adam Swoboda’s tone is so dreamy, I wish he’d sing me lullabies every night before bed, and I’m 27 years-old. Our interaction is tragically short-lived and I am passed off to Hot Lips Soda Account Manager Lars Burkholder who fills me in on the company’s history. “Hot Lips is a pizza restaurant first, and a soda company second,” he tells me, before adding Hot Lips Pizza has six locations across Portland. He encourages a sampling of the company’s “Tough Mother,” a pie with pepperoni, onions, peppers, and spicy chipotle sauce. Hot Lips was founded by David Yudkin has been making artisanal pizzas with ingredients sourced from local farms since 1984. Burkholder describes the company as “farm-to-table before it was cool.” After making fresh pizza for so long, Yudkin decided he wanted a fresh beverage to go with it, something he couldn’t get from the big companies. He wanted it to be “kid-friendly,” too. And who doesn’t love an ice-cold soda to wash down a few slices with? The farmers he was sourcing his pizza ingredients from were already harvesting fruit too, so it was a natural starting point for his own idea of soda. Yudkin came out with Hot Lips Soda in his restaurants in 2002 and began bottling in 2005. When you think of Hot Lips Soda, you should think of fresh fruit. “We’re starting from the actual fruit” and not an extract or oil,” Burkholder explains. They’re not shy about admitting that they go the extra mile to create a quality fresh-fruit soda “It’s pretty labor-intensive. It’s pretty expensive,” he reveals. Five of the company’s six sodas contain only four ingredients: fruit, lemon juice as a balancing agent, cane sugar, and carbonated water. The sixth, lemon, has just three since lemon is also the main fruit flavor. The company’s promise to its drinkers is that they will never put additives in their soda. No preservatives. No artificial colorings or flavors. Ever. Burkholder emphasized that the company is “really proud of the fact that it’s so simple,” in talking about each flavor. Hot Lips Soda is about letting the core fruit shine through for the drinker’s palate to absorb and enjoy. In order to ensure this, Hot Lips Soda is less carbonated than what you’re probably used to even in a craft soda. Each batch of soda also may taste slightly different from a previous output depending on the flavor the fruit when it was picked, something that reminds us of WiscoPop Cherry.

When choosing a Hot Lips flavor to sample, it only seemed right to start with Marionberry, an Oregon-native fruit. Marionberry is a hybrid of two types of blackberries bred together to create one super black, er… marionberry. So imagine those two blackberries as Jay Z and Beyoncé. Blue Ivy is their Marionberry. Listen, no one ever said we had to be good at analogies for this job. “It’s kind of the unofficial state berry of Oregon,” says Burkholder. An interesting fact about the marionberry soda is that it’s Hot Lips’ thickest soda in terms of consistency. The soda contains real marionberries, carbonated water, cane sugar, and lemon juice instead of citric acid for a cleaner, more natural balancing agent. And while red raspberry is the company’s most popular soda, marionberry apparently has a very loyal local crowd. “It’s very representative of the Hot Lips brand” because it is a local berry, Burkeholder notes. If you’re ever up around Portland wandering the streets in your flannel and tattered jeans with a bag of Voodoo Doughnuts in hand, Burkholder encourages you to stop by one of the pizzerias to come enjoy the company’s exclusively in-house “seasonal experimental” soda that changes every month. Past flavors have included cranberry, blood orange, and honey just to name a few.

Where to get: Hot Lips Soda can be purchased at all Hot Lips Pizza locations, as well as retailers in Alaska, California, Idaho, Oregon, Utah, and Washington. You can also buy Hot Lips soda online directly from the company at their web store in single bottles, 6-packs, and 12-packs. You can also buy it online from Summit City Soda in 12-packs and 24-packs. Hot Lips Soda is also sporadically available throughout the U.S. but the company is currently working to make their physical availability more consistent in the eastern portion of the country. 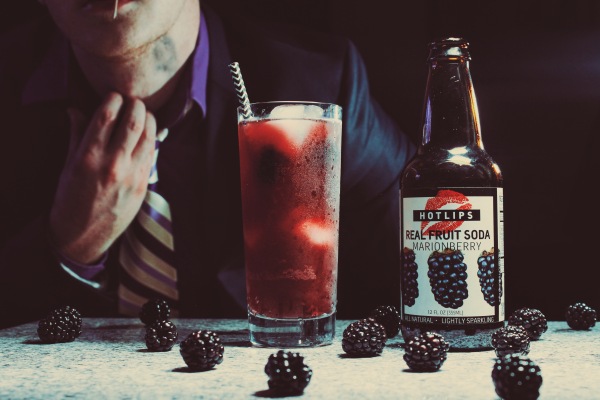 Nose: Mmm, like a piece of blackberry pie. You can almost smell the crust.

Taste: Frothy carbonation; rich blackberry; blackberry pie. If you’ve ever had a fresh piece of blackberry pie, this will taste familiar to you. The carbonation really aids in the flavor of this soda. The smaller bubbles and marionberry juice combine to create a frothy, velvety texture. It’s not creamy, but there’s definitely a little bit of a berry foam flavor going on. It’s slightly tart, but has enough sugar to make it easy to drink. Big berry flavor, like the kind you taste when eating a piece of grandma’s blackberry pie.

Finish: The tartness has subsided by now and you’re left with sweet, authentic blackberry flavor.

Rating: Hot Lips uses real fruit in their sodas and you can taste it. For those of you who don’t know, Marionberry is a hybrid between two different types of blackberries, so it’s just a fancy Oregon name for blackberry. And Hot Lips Marionberry has big, delicious, thick, black… berry flavor. I thought about writing a joke there, but I just don’t feel like getting beat up today. What stands out about this soda is the freshness of the berry flavor. It doesn’t taste like artificial blackberries or blackberry candy. If you know what actual blackberries taste like, this is it. The initial tartness, the sweetness on the finish, and the big berry taste. It’s all there. It really reminds me of the inside of a piece of blackberry pie. Definitely a nostalgic soda, and Lord knows that’ll appeal to many. Hot Lips lists lemon as another ingredient in this soda, and that’s something I’m not tasting. But I don’t think that’s a bad thing. It’s just a balancing agent. Marionberry is a simple flavor of soda that rests on the laurels of its main ingredient. Luckily, blackberry is a strong enough flavor to carry the soda from its initial fizz to its final sip. Hot Lips is one of the more popular craft sodas in America, and their take on Marionberry shows why the company continues to thrive.