History: “It really is a one-of-a-kind product.” About halfway through my conversation with Vito Gerasole, the self-proclaimed “Sultan of Soda” and owner of Natrona Bottling Company, he drops this line that raises my eyebrow about one of his sodas. The culprit? Pennsylvania Punch, a unique take on grape soda made with almost zero carbonation. Grape soda is classic – it’s one of the first flavors I think of when I conjure up images in my head of vintage flavors. And Natrona Bottling is one of the most vintage companies out there. They’ve been around since 1904. They still use pinpoint carbonation to put CO2 in their sodas, a time-consuming, expensive process involving dry ice that produces larger quantities of finer bubbles than traditional methods. It’s a company that does things the old-fashioned way. But here’s the thing: Natrona already makes a traditional grape soda pop. So why make another with almost no carbonation? The short answer: tradition. “The recipe dates all the way back to 1924,” Gerasole tells me. Gerasole himself is an agent of tradition. Back in 2010, Natrona Bottling was a company at the brink of bankruptcy with just $4,000 in its bank account. So with the help of an angel investor, Gerasole saved Natrona, Pennsylvania’s local soda bottler. “I’m a very nostalgic person,” he admits. There was no way he was getting rid of one of the company’s original flavors. He’s honest in telling us Pennsylvania Punch “is not my most popular flavor, but certainly one of my most unique.” Essentially what we have here is a a hybrid between grape soda and Concord grape juice with the latter being more of the goal. In fact throughout most of our conversation, Gerasole refers to Pennsylvania Punch as a “grape drink.” If the name sounds familiar to some of you in the northeast, you might be thinking of “Delaware Punch,” a drink similar in concept but made with high fructose corn syrup instead of cane sugar. We’re pretty excited to try this one just to figure out what’s going on here.

Where to get: Natrona Bottling Shop • Antiqology Store • Galco’s

Taste: Sweet candy grape, smooth, sugary, very light carbonation. I see now why Gerasole referred to this as a “grape drink” because there’s hardly any carbonation in this soda. Just a touch of it on the finish. That said, the grape flavor is strong – more purple than green grape and more artificial and candy-like than actual grape juice. This is very grape-y and very sweet, but at the same time it’s also smooth and even kind of refreshing. The flavor is very much an old fashioned one. Fans of grape soda will enjoy.

Finish: Tangy purple grape flavor that lingers. This is actually where I taste the carbonation most. It kind of fizzes on your tongue at the very end of each sip.

Rating: What fun little grape soda… er, drink? Pennsylvania Punch tries to tow the line between grape soda and grape juice, but at the end of the day it’s sort of both. It has the sweetness and artificial grape flavor of a classic grape soda without most of the traditional carbonation. Despite the very sweet taste and the lack of bubbles, this is not syrupy. In fact, it’s pretty clean and easy to drink. I love the tanginess on the finish too as a nice little nuance. On a hot day by the pool, I could guzzle this like my uncles does a sixer of Michelob Light, except I won’t call my ex and then black out while my grill’s still on. Hope you aren’t reading this, uncle Dave. My one qualm with this soda is that it’s very, very sugary. I think kids will love it, but adults may be more apt to drink Natrona’s regular grape soda because carbonation typically pulls back that sugar factor a little bit. Pennsylvania Punch is a treat to be enjoyed on a warm day, but I probably couldn’t go past a bottle or two before needing insulin. That said, I’d definitely recommend it if you’re looking for a refreshing fruit soda or something to drink outside at a barbecue or pool session. Pennsylvania Punch: it’s familiar, but different. Only the best companies can successfully put new twists on something old, and in this case, Natrona’s been doing it since 1924. Go see what they’re all about. 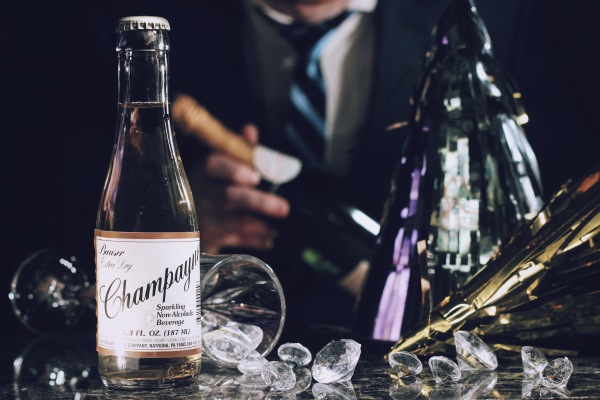 History: Sometimes a product comes along in craft soda that’s so novel(ty) and simultaneously cool, you buy it without question. Natrona Bottling Company produces several different flavors likely to catch eyes and furrow brows, from Plantation Style Mint Julep and Pennsylvania Punch to the smaller, more sophisticated Bauser Champayno. But… what is Champayno? On the surface, it appears to be a miniature version of regular soda, perhaps with a mock champagne flavor. I can’t promise you that will be the case and neither can Natrona Bottling’s Owner, the self-proclaimed “Sultan of Soda,” Vito Gerasole. “I don’t know how to describe the flavor,” he confesses. Gerasole is a proud Italian who to this day still works at his family restaurant, Gerasoli, in Pittsburgh, Pennsylvania. But in 2010 he was given a chance to take the reigns of the failing Natrona Bottling Company, a soda bottler that had been in business since 1904. The Natrona, Pennsylvania soda company had just $4,000 left in their bank account when an angel investor provided a financial opportunity for Gerasole to fix things. Fortunately, Natrona had very little debt; all they needed was a new marketing push. But for Gerasole, why take the time and effort to breath life back into a white dwarf in the rapidly expanding craft soda galaxy?  “I’m a very nostalgic person,” he tells us. And Natrona is a very nostalgic company. In fact, the bottler’s signature is that it still uses a very old method of production for the bubbles in their soda. How old, you ask? Gerasole boasts, “I believe we are the last soda producer that uses a style of carbonation called ‘pinpoint carbonation’.” Basically what this means is you should taste much smaller bubbles than you’re accustomed to in soda, almost along the lines of champagne. This is achieved by dropping dry ice pellets into pressurized tanks, creating a much smoother, tinier bubble. “Effervescent” is a term Gerasole kept using to describe it. From nearly bankrupt back to bubbling over in business, Gerasole sought to add new flavors to the company. The one he introduced but still doesn’t quite seem to understand is Champayno. It’s a bit of a mystery even to its creators, so much so we have no information with which to detail it. Gerasole best describes it as a 6.3 ounce bottle of dry soda made with pure cane sugar that he one day may transition into a mixer. It was inspired by a similar beverage made by a company called Champay in the 40’s when sugar was being rationed for the war. Admittedly, those sodas were more popular in the 70’s and 80’s. Now that sweeter sodas are back and bigger than ever, Gerasole isn’t sure about the future of Champayno. I’d get your hands on it now while you can because it might just become a collector’s item in the future.

Where to get: You can find Natrona Bottling Company sodas in Pennsylvania, Ohio, and West Virginia. But as for Bauser Champayno, because some retailers don’t stock it, you’re most reliable bet is to buy it online directly from Natrona Bottling.

Nose: Kind of like not quite fermented white grapes – like a fizzy white wine. Pretty mild overall.

Taste: Ginger ale; mild white grapes. This definitely tastes like a dry ginger ale with a white grape influence. The carbonation is flush with lots of tiny, little bubbles that feel nice in the mouth. It’s dry. Very, very crisp for a soda, but with enough sugar to make it easy to drink. There’s a pretty distinctive tang to this soda, and I’d say that’s its defining characteristic. Has more of a zip than most ginger ales, just not in a spicy way. Instead of a spicy kick, this has a tangy white grape flavor that accompanies the dry ginger ale flavor. I wouldn’t call this champagne-like, but rather a unique take on a classic ginger ale.

Finish: Similar to the body of the soda, though slightly more acidic and tangy. Not a lot of variance.

Rating: Does Champayno taste like champagne? No. But honestly, does that really sound like a good idea? If we learned anything from those Harry Potter Jelly Beans that came out years ago, it’s that not everything in life – namely dirt and boogers – needs to be imitated in food. We don’t need champagne-flavored soda either. But we might need Champayno. It’s like a ginger ale that got dressed up for a fancy party. For one, look at the bottle. I’m a full-grown man, and even I think this little 6.3 oz. bottle is cute as hell. The flavors are familiar, yet different. It has all the characteristics of a mild ginger ale: flavor, crispness, and dryness. But there’s also a white grape tanginess you taste here that isn’t present in other ginger ales. This and the carbonation are the only traits that make it remotely comparable to champagne. Champayno is definitely a grower, the problem is that at 6.3 oz., it’s gone before you can really process its unique flavors. For that reason, I don’t think I can confidently rate this higher than three stars, though I definitely think if I had more of the liquid, I might rate it higher. I get that the smaller bottle conveys a greater sense of sophistication, but I think you need about 10-12 ounces of Champayno to fully appreciate it and make a judgement on it. I also think the subtle white grape flavors really work well here and I wouldn’t mind if they were strengthened ever so slightly. There’s a lot of good stuff going on here. It’s fun. It tastes nice. And it looks classy. It’s also not the easiest soda to acquire, which for many will increase the appeal even more. If you can get your hands on a tiny bottle of Champayno you just might be the coolest one at the party. Definitely one to put on your list.