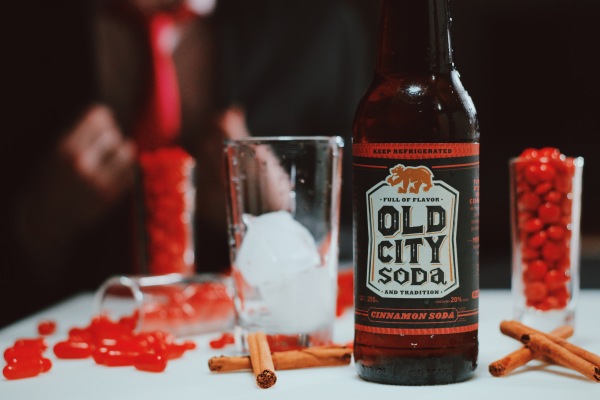 History: “I don’t mind because one day you’ll respect the good kid, m.A.A.d. city,” are the forewarning words uttered by one of rap’s most respected lyricists, Kendrick Lamar, in reference to Compton, California. But what about a new kid from the old city? Could they command the same respect? Mike Gulley wanted to find out. Gulley is the founder of Old City Soda, a craft soda producer out of Cleveland, Ohio. Fortunately for Gulley, his battlefield is the nerd-heavy craft soda marketplace instead of the gang banging streets of Compton. In 2011, Gulley started experimenting with his own ginger beer at a restaurant called Paragon, a wine bar in Cleveland. People loved it. So he kept going, trying other homemade soda flavors until in 2013 he bit the bullet and went all-in, launching Old City Soda in the fall. It’s a labor of love all the way down to the name. If you look up and down Gulley’s family tree, you’ll repeatedly see the German name “Altstadt,” which stands for “the old city.” To this day, his grandparents maintain a newsletter called “The Old City Beacon.” Gulley comes from the bar scene, so he prides himself on making handcrafted sodas big enough in flavor to be enjoyed both out of the bottle and with alcohol to create better cocktails. He says he “wanted to harken back to way soda used to be made,” but with a twist. Gulley wanted to use the old methods, but produce new flavors. My sister has been using the same philosophy with children and currently has five boys… some people never learn. Luckily for the rest of us and Gulley, we won’t need to wait nine months to hold a new Old City Soda bottle in our hands. Quite the opposite, actually.

The company’s biggest selling point is the freshness of the ingredients in its soda. “The moment from bottling to being available to drink is a matter of days,” Gulley explains. Most sodas come in at under 100 calories per bottle, so you shouldn’t have to transition from yoga pants to sweat pants by the end. They don’t even use preservatives in their sodas, meaning that each bottle tastes fresher than what you’re used, but also needs to be refrigerated and has a much shorter shelf life (typically just weeks). Currently, Old City Soda produces 8 flavors, several of them pretty left field, including lemon soda, hibiscus soda, and perhaps the most unique and intimidating: cinnamon soda. Of course, we had to review the latter. For inspiration, Gulley sought advice from the godfather of soda, John Neese, owner of Galco’s in Los Angeles, California. He wanted to know current trends and what was truly unique in terms of craft soda. For a look at the eclectic Neese, watch this video. I know most of you out there think cinnamon soda probably tastes like hot barf, but keep calm. Gulley’s idea for cinnamon soda is not based off red cinnamon candies, despite our photography. We just did that because it looks dope. No, this is a cinnamon soda for the sophisticated. You need glasses and an ascot to drink this. Old City’s Cinnamon Soda uses a blend of a blend of Vietnamese cinnamon, pure cane sugar, allspice, clove, cayane, and Hungarian spicy paprika. The cinnamon is brewed for two days before being blended with the sugar and purified water to create what you taste in the bottle. Gulley admits it’s a sipping soda and also doubles as a great topping for a float. But let’s be real here – it’s one thing to be told all of this stuff. It’s another thing to taste it. To be honest, we’re still a little intimidated.

Where to get: Old City Soda is sold mostly in the Cleveland and Columbus, Ohio areas. You can find out if it’s available near you by looking here. For the rest of you not near Ohio and still wanting to purchase Old City Soda, the company does fulfill orders – just contact them directly (contact information is at the bottom of their website).

Taste: Crisp, candied cinnamon; holiday spices. This tastes decidedly different than it smells. To answer your question, yes, this tastes like cinnamon – but it’s a different cinnamon flavor than you’re used to. It’s not like a red hots cinnamon, but more of a stewed, natural flavor. Old City Soda uses Saigon (Vietnamese) Cinnamon in this craft soda. They actually brew it for two days before it goes into their bottles. And honestly, that’s exactly what it tastes like. It tastes brewed. It’s almost like a cinnamon flavor found in teas and coffees. It’s mild. It’s earthy. It tastes real. This isn’t overwhelming, something I was worried about coming in to the tasting. If you’ve ever had cinnamon-soaked red apple rings, the flavor in this is more akin to that than candy. Cinnamon is typically a very strong flavor, so I’m guessing the brewing process helps cook some of that out. That said, this is still cinnamon soda and cinnamon isn’t something you’re likely to drink in bulk. This is a sipping soda on its own and more likely to be paired with something else, like ice cream or liquor.

Finish: Warm-cooked cinnamon sticks with a light Christmas spiciness in the throat. There’s also some notes of nutmeg and burned sugar.

Rating: This is really interesting and surprisingly good. Cinnamon as a base flavor in a soda seems like a difficult task, but this is the best version I’ve ever tried. It really reminds me of the holidays. It’s a perfect drink for the Thanksgiving and Christmas seasons. This and a little bit of bourbon might actually make spending time with your horrible aunt tolerable. The brewing of the Saigon Cinnamon helps make the soda’s flavor easily approachable. On its own, this is probably going to be a divisive beverage because, let’s face it, not everyone is going to like cinnamon soda. And I’ll be real, it isn’t something you’d probably drink more than one of in a sitting. I’d suggest pairing it with something. Drink half on its own with a nice home-cooked meal, then pair the rest with bourbon and get toasty. Pour it on vanilla ice cream for a cinnamon float. Put half of it in a shot glass with some cheap whiskey and get white-girl-wasted off your own version of Fireball. I’ve already done all of the above, so we need to end this review because the bourbon is hitting me. No matter your niche in the craft soda market, I strongly recommend you branch out and try this. It’s a great example of a bottler taking a risk and the result being worth your dollar.