History: You hear the crickets chirping as you gaze through the forest out into the sunset, the clouds looking like fluffy biscuits charred with intense purples and reds. The evening dew is beginning to collect on each blade of grass. You hear the buzzer on the oven and know warm apple pie is minutes away. Life is simple in Chattanooga, Tennessee. The soda jerks at Pure Sodaworks want to maintain that simplicity in each soda they produce. And that warm apple pie? They wanted you to be able to drink it. But if it weren’t for a series of events, Tennessee’s most notable craft soda brewers might never have come into existence. First, there was Everyday Eclectic, Matt and Tiffany Rogers’ artisan soap and candle shop that opened in 2007. It’s still going strong today. They sell all kinds of southern goodies there, like maple bacon candles. I know what you’re thinking, but my girlfriend is already clearing our closet out to buy all of them, so don’t even bother. Well, in 2011 Everyday Eclectic moved into Chattanooga’s small business incubator. Also in the same building? Lots of food companies. “Food always win,” Matt Rogers quips. Next, there was the day at the coffee shop. Dating back even before Everyday Eclectic, Rogers stopped into a local coffee shop and ordered a standard cup. While preparing his coffee, he overheard a customer order a lavender Italian soda. “That sounds amazing,” he recalled thinking. The idea stayed with Matt and Tiffany, and with the influence of all the food-centered small businesses around them, they started brainstorming ideas within that industry. “We wanted to figure out something new that was already in line with what we were doing” in terms of using all-natural ingredients, says Rogers. To put it simply, they really just stumbled into soda. Matt started researching how it was made back in the days when soda was served at pharmacies in order to make the medicine palatable using natural herbs and spices. The couple wanted to pull from that era, but modernize it for today’s audience.

Next, Matt and Tiffany started to experiment with flavors. After positive feedback from friends, they decided to make the leap into the soda business, and in 2011 Pure Sodaworks was born. Tiffany picked the name, Matt designed the branding. They started with serving fountain soda at their local market and due to high demand, realized bottles needed to happen next. That led to a successful Kickstarter that raised over $23,000 and from that point there was no going back. Today, Pure Sodaworks is a three-person operation still trying to meet that demand. Initially, over 40 different flavors were brewed and tested, and then narrowed to six. Without a doubt, the most American of the bunch is apple pie, the soda we review today. “We wanted to come up with a more clever name, but it tastes like apple pie,” Rogers adds. The ingredients are simple and real: carbonated water, cinnamon, vanilla and apple cider sourced from a local orchard in Cleveland, Tennessee. The soda took home second place in the people’s choice category at the 2015 Homer Soda Fest. It’s a nonconventional flavor with actual ingredients you can buy at the grocery store. And that’s what Pure Sodaworks prides itself on, making unique flavors that are rooted in trying to be delicious instead of relying on novelty or gimmicks.

Where to get: Pure Sodaworks sodas are sold primarily in Chattanooga, Knoxville, and Nashville, Tennessee. You can buy Apple Pie Soda online at Summit City Soda. 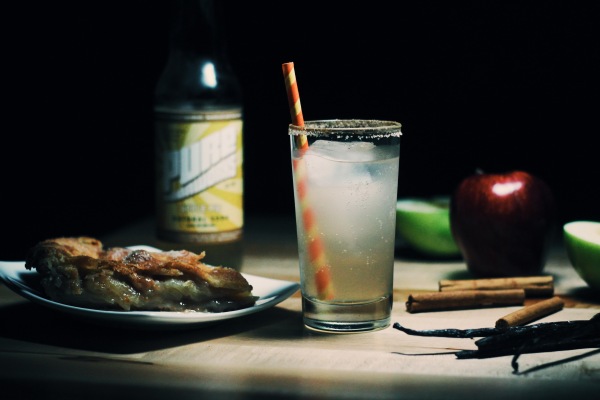 Nose: Apple juice; soft vanilla; light cinnamon. Smells like the best apple juice you could ask for with maybe a hint of creaminess to it.

Taste: Cinnamon; sugar; apple pie. Oh man, this is pretty spot on in terms of tasting like apple pie. The apple flavor is distinctive. There’s a creaminess to it that tastes identical to that traditional apple gooeyness found inside a pie. The first thing you’ll notice is the carbonation. It’s rapid and full of fine bubbles that taste like they’ve been individually coated in cinnamon sugar, yet there’s also a tartness to them. The bubbles quickly peel back to reveal a layer of apple pie flavoring with notes of mild apple juice, sweet cinnamon and slightly creamy vanilla. The sugar in Pure Sodaworks’ Apple Pie Soda is sweet, but the carbonation and cinnamon work in tandem to not let it get out of hand. Bottomline: if someone asks what this tastes like, you won’t have a problem saying apple pie.

Finish: Like eating a piece of apple pie. You get that flakey vanilla crust and cinnamon sugar-apple combination. Spot on.

Rating: Believe it or not, there are a lot of sodas out there that try to replicate the flavor of pies. Few do it with the sophisticated flavor profile Pure Sodaworks has brewed up in their Apple Pie Soda. This is a soda that accomplishes exactly what it sets out to be, does it with only a handful of real ingredients, and doesn’t hide what’s in the bottle. That’s admirable no matter what the quality of the liquid is inside. Luckily, for all soda drinkers, this is a jackpot. It’s tart, sweet, authentic, flavorful, and slightly creamy on every sip. It’s a whirlwind of flavor. The mild creaminess of the vanilla works perfectly with the apple juice to give off that classic gooey apple pie filling flavor. The cinnamon and sugar compliment each other and interact with the tartness of the apple and the soda’s carbonation to give a balanced mouth feel. It’s hard to critique this. If I had to amend anything, maybe cut back on the initial wave of tart bubbles and dial up the vanilla profile ever so slightly. You’d be hard-pressed to find a soda that imitates a pie flavor as well as this one. This is the soda you ask out on a second date and the one you bring home to the family. Soda connoisseurs of all ages should put it on their list. Welcome to the five-star club.