History: This whole thing was an accident. Booklyn Soda Works wasn’t supposed to become one of the only craft soda companies in the world to use strictly juices, herbs and water. “We were just looking for the perfect mixer for our Dark n’ Stormy,” says co-founder Caroline Mak. But Mak is an artist and her partner and co-founder Antonio is a chemist. So it’s not hard to figure out how we got here. The company is renowned for its large quantities of fruit juice in their sodas. What makes Brooklyn Soda Works truly unique is that they force carbonate the juice in your soda directly, meaning they don’t use any syrups or preservatives. This also means their soda has a limited lifespan for ideal flavor and must be kept refrigerated. This is similar to the fellas at Cannonborough Beverage Company. Simply put, Caroline and Antonio are artisan soda experimenters. Since their inception in 2010, the company has churned out over 30 flavors, including hits like honey grapefruit jalapeno, fresh cucumber with a dash of sea salt and lime, and apple and ginger. I haven’t seen that many varieties of deliciousness since I lived in the dorms! Because of the emphasis on fresh produce and fruit, many of their flavors are seasonal. For Spring and Summer 2015, the company is placing an emphasis on watermelon flavors. “We cold-press the watermelons ourselves and use fresh herbs to pair the juice with (no sugar is added). The result is a super refreshing and healthy sparkling drink.” Not only does Brooklyn Soda Works use fresh juice in their sodas; they use a lot of it. And they’re proud of it: one of the business’s catchphrases is “Damn Good Soda.” We’re about to find out.

Where to get: Currently Brooklyn Soda Works’ sodas are only distributed throughout New York City. The company is working to get its online store up and running. Because of the soda’s perishable nature, everything will need to be shipped via two or three-day shipping in an insulated container. Until then, if you’re interested in the stuff, contact the company directly. 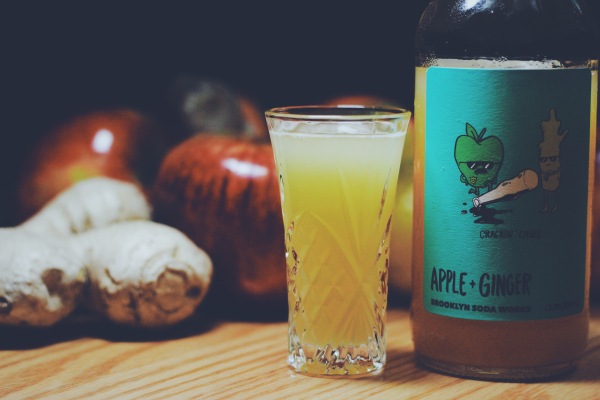 Taste: Apple juice; mild ginger; lemon zest. On the first sip, the apple juice is immediate. Many sodas contain trace amounts of fruit juice. Apple + Ginger is rare in that it contains 71% juice, a mixture of apples, ginger, and lemons. The rest is water. Just four ingredients. There isn’t even any added sugar. For that reason, it only has a month-long shelf life. It shows in the flavor. The apples taste fresh-pressed and authentic. This is light for a soda with ginger. You can definitely tell there’s no syrup used. The ginger here is very mild and does not have spiciness to it. Some of that is probably due to the lemon juice, which gives the soda a nice citrus zing on the back end. Mixed together, the three fruits in this bottle can give off a bit of an herbal flavor at points, almost like a tea, before morphing back into mainly apple and ginger. I’m not sure if that’s intended or an indication of the flavors working together. I don’t mind it, but it may not be for some. It’s very interesting and not as spicy as expected. The ginger is the only flavor I’d like to see more pronounced. The apple and lemon work well together for a nice balance of sweet and sour. Despite not adding any sugar, the sweetness from the fruit really stands out as a high point. Overall, very refreshing and balanced.

Finish: Light ginger with a lemon twang that lingers on the back of the tongue.

Rating: This is a pure fruit soda. With only four ingredients and void of added sugar, the soda maintains a nice sweetness from the apples that balances well with the citrus of ginger and lemon. Apple is the standout flavor in this bottle, but the lemon here is really well done. Though the ginger could have been more pronounced, you never know how that might affect the overall flavor profile. This is definitely a summer soda to be enjoyed with minimal clothing and warm weather. It also mixes really well with booze. The apple, ginger and lemon flavors at times meld to form some herbal tea-like notes on the palate, so be warned if that isn’t your thing. What Brooklyn Soda Works did best here is create a soda that tastes authentic and refreshing. It’s fresh. So fresh, it lasts only for a month at its peak flavor offerings. Overall, this is definitely well-done and worth a shot. Wait until the weather warms up just a smidge more, bust out your crop tops and weird shorts… or whatever the hell you hipsters wear these days, and brag about how you’re only drinking organic craft soda today. You won’t make any friends, but your taste buds will thank you later.