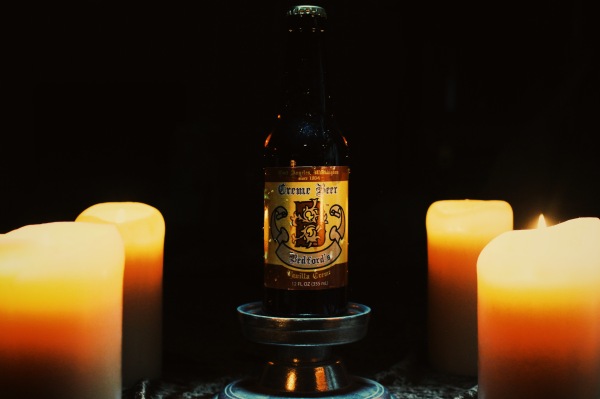 History: Creme Beer. The name alone sends a chill of nostalgia and intrigue down your spine. That was part of the plan Ed Bedford had when he concocted his first vanilla cream soda to sell on the open  market. Bedford is a down-to-earth northwest native with a friendly, grizzled voice. He says over the phone, “I’m almost 70 years-old and soda was a big thing in our life.” He wanted it to stay that way for the current generation, but also wanted to make sure they were drinking old time classics made with higher quality ingredients than something you might get at a fast food joint. So after a long stint as general manager for a beer, wine and soft drink distributor, Bedford founded Bedford’s Sodas in 1984. Today the company sells five different flavors. Based out of Port Angeles, Washington, he says good soda had faded away in the Pacific Northwest. He sought to bring it back by first starting with cream soda, a flavor no company was really emphasizing in the mid-80’s. The idea actually came from Steve Sourapas, an owner of the Dr. Pepper Bottling Company in Seattle. Bedford explained that during prohibition, many bars and saloons referred to cream soda as creme beer so they didn’t totally lose the boozy influence. The name stuck with his father, who passed it on to Bedford who threw it on a label to give cream soda a unique name. Bedford worked hard to get the flavor exactly where he wanted it. “I wanted a true vanilla cream,” he said. He put together a tasting panel with over 100 years of experience in the beverage industry to help pick the right recipe. He’s been working with the same flavor chemist for the entirety of his craft soda-making career. Before we hung up the phone, he paused and added, “I think that my sodas are as genuine as I can possibly be to what I can remember as a child. Always serve them ice cold, never with ice.”

Where to get: Bedford’s Sodas are sold all over the place online, including Summit City Soda, Orca Beverages (who bottle Bedford’s soda), and Amazon. You can also find them in Rocketfizz retailers.

Nose: Dunkin’ Donuts Bavarian Kreme Custard Donut. Hey man, it smells like that. Also vanilla, but you knew that.

Taste: Sugar; vanilla; creaminess. This is definitely an intense vanilla cream soda. No bubblegum here. The vanilla is creamy and sweet. It smells like my favorite donut, but the vanilla, at times, tastes a little bit more like vanilla buttercream or custard. This is a sweet soda, but smooth and drinkable. It tastes like classic cream soda with the volume turned up. You can really tell this uses higher quality ingredients. Everything is a little bolder and better. Nicely done.

Finish: Vanilla custard with just the sliiiiiightest hint of caramel. An excellent finish that begs for more sips.

Rating: This is an excellent cream soda, but before I tell you why, let’s talk about the first thing you see: the bottle. There’s something about it that draws you in. Maybe it’s the regal, old royal feel of the Bedford’s crest in the middle. Maybe it’s the medieval lettering of the font. Or maybe it’s the fact that this is called creme beer and not cream soda. Bedford’s does an excellent job selling the customer before the liquid even enters the equation. The same could be said about the dude at Lowe’s who sold me my overpriced toilet. But this is soda you’ll never throw down the drain. It’s fairly simple, but cream soda is a simple drink. It’s smooth and creamy with rich vanilla and slight notes of caramel on the finish. The vanilla almost has a hint of custard flavor to it that separates it from other vanilla creams. It could probably hold off on a gram or two of sugar, but there’s no question this is must-try cream soda. It also works well with an oaky bourbon to balance out the sweetness. Buy this. Tell your friends you had a creme beer today. Say nothing else and walk away. You’re a soda jerk. And we like it.