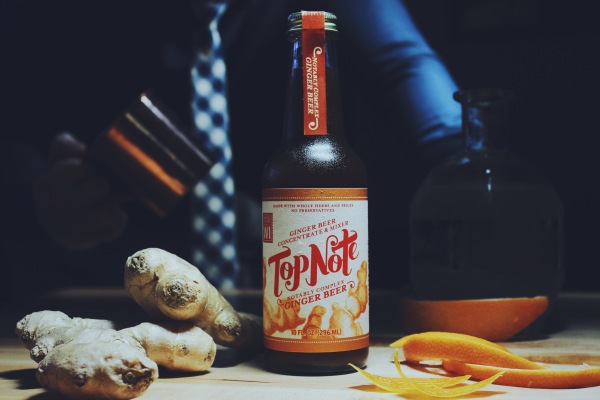 History: Mary Pellettieri was growing increasingly tired of the soft drink selection in restaurants. It was always the usual brands. No creativity. No variety. And seemingly no room for improvement. She disagreed. She wanted to dial the clock back and return to the days of flavored tonics, something a little more bitter on the palate. Italian sodas, another bitter soft drink, were a major inspiration. When you think tonic, let’s be real, you think alcohol. But based on her background in beer, her desire might not seem so surprising. In 2014, Pellettieri founded Top Note Tonics in Milwaukee, Wisconsin, an all-natural artisanal tonic and soft drink mixer company. “People forgot tonics could be used in the soft drink category,” she notes over the phone. Top Note Tonics lives the best of both worlds, serving both the craft cocktail and soft drink markets, though admittedly, it gets more mileage from booze. If you’re a soda fan, Ginger Beer and Bitter Orange are the two flavors most likely to stand out. Just add a couple ounces of syrup to eight-ish ounces of seltzer water and you have a do-it-yourself craft soda. If you’re into booze, try the exotic spice-infused Indian Tonic or the company’s most popular Gentian Tonic. Pellettieri recalls how difficult of a process it was making all-natural syrups with premium ingredients. Often soda companies work with what are called “flavor houses” to get their syrups tasting just right without using expensive ingredients. Pellettieri says many flavor houses are hesitant to innovate and that Top Note Tonics was unwilling to compromise on the quality of its ingredients, making any kind of partnership difficult. “We don’t use any fake ingredients. Everything that we use is derived directly from an herb or a natural extract we work with,” she adds. You also won’t find any preservatives in Top Note Tonics. Because Ginger Beer is so hot right now, and because it seemed like the syrup with the most logical connection to craft soda, we chose that one to review. The ginger beer came in the company’s second wave of flavors and is made with lots of fresh ginger, prunes, grapefruit peel, and a Belgian candy sugar often used in beer brewing. Sign us up. We’ll sign you up too. Maybe.

Nose: Out of the bottle, there’s a musky ginger smell going on. When mixed with the seltzer water, the smell becomes much sweeter and more like a traditional ginger beer.

Taste: Citrus; ginger; spice. There’s a definite citrus note to this on the first sip. Yes, you can taste the ginger immediately, but it’s paired with a citrus element. Top Note Tonics’ Ginger Beer is made with grapefruit peel, so that’s likely what you’re tasting. The ginger has a little bit of heat to it, but nothing that’s going to overpower anyone. Like on the smell, the ginger flavor to this is a bit musky, but it’s accompanied by an unusual sweetness. Likely, this is simply due to the way the ingredients interact, but I taste a little bit of burned brown sugar in here to go along with the ginger. That could be the Belgian sugar coming into play. It’s a different type of sweet. Definitely an earthier ginger beer with a little bitterness.

Rating: Let’s just call it like it is: most soda purists approach craft soda syrups with a lot of hesitation. Bottled soda feels safer, and more importantly, it’s less work. I have to walk all the way to the fridge and add WATER to this? What if I mess the proportions up? What if I don’t even like the recommended recipe? People are willing to think out strategy, but much less inclined to actually take a few more steps to ensure refreshment. It’s just the way we are. Why do you think Netflix and pizza delivery are so popular? That said, Top Note Tonics has managed to make a ginger beer syrup that when added with seltzer water, forms a very serviceable soda. If someone poured the right combination of water and syrup into a bottle and served it to you, I’d seriously doubt you’d know this began as a bottled soda syrup. The ginger spice is mild, probably a four or five on the heat scale. That gets paired with some semisweet grapefruit notes and a distinct, earthy sugar flavor. You’ll taste a little bit of bitterness at the end of every sip. When paired with rum, this makes a tremendous dark and stormy. On it’s own, it’s solid. I’d prefer the ginger to be a little bolder and the sugar to be crisper. But the more and more you drink it, the more you like it. Here’s what I would do: drink one on its own as a soda, then one with rum and see what you think. The grapefruit goes a long way in supplementing the lack of heat in the ginger. It really adds some nice citrus flavor to a ginger beer that needed a companion flavor. The two elements work well together. Even we at Five Star are cautious when it comes to soda syrups, but we’re here to tell you that this one can come over and stay the night. Let it show you a good time.