History: In the little town of Cabot, Vermont rests Hooker Mountain Farm, a local spot that will sell you anything from live cows to maple syrup to  post-Heaven barbecue-flavored cows (beef sticks). But they’re arguably most famous for the their maple syrup. How Vermont of them. David Thayer founded the farm in 2010 where they harvest their own maple syrup. But maple isn’t the only recognizable type of tree on the land. You’ll notice a canopy of spruces and firs staring down at you too. Thayer decided these trees also had culinary value. But what to use them on? Keeping his background in home brewing in mind, Thayer thought up a novel idea: farm-to-bottle craft soda using Hooker Mountain’s signature maple syrup as the primary sweetener. And those spruce trees? He took their needles, blended them with maple syrup, pure cane sugar, and lime and created Maple Spruce and Lime Soda. Hooker Mountain Farm has produced craft soda since 2013. Besides Maple Spruce and Lime, their two other flavors of soda are Maple Birch Beer and Maple Orange Cream. About 70% of the sodas’ maple syrup content is gathered right off the farm. Thayer’s says, “We wanted to resuscitate a more natural-tasting soda,” a reason why each bottle’s sugar content clocks in at 23 grams, about half of what a normal craft soda contains. Thayer likens this particular soda to a lemon-lime with a spruce influence. I’m an avid hiker myself who enjoys living off the land during my excursions, though I rarely trek through forests because let’s be real, the bears are waiting for you to stumble into their land like a drunk girl after bar close. But even if I did peruse through the woods, I’ve never imagined what they’d taste like in liquid form. Until now.

Where to get: Hooker Mountain Farm soda is currently only sold in Vermont. If you’re outside the area, contact the company directly via phone or email. Just know shipping may be pricey. In the near future, this should be much easier when the farm launches their line of soda syrups that will be more cost-effective to ship. 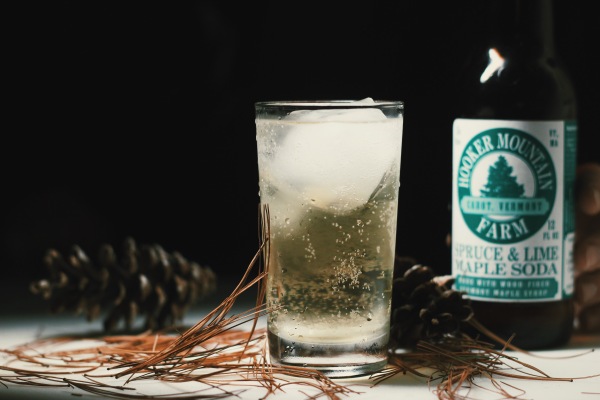 Taste: Pine needles; eucalyptus; lime. Whoa, prepare your taste buds for a ride through the forest. This is tree soda with some notes of botanicals. Right away you get a wave of pine tree flavor. It won’t be for everyone. The spruce flavor is strong. There’s also some undertones of eucalyptus. Both flavors become more palatable as you continue drinking. The lime comes in late. It’s a very citrus-y lime. Also strong. It’s an acquired taste for sure. This soda is a grower. The one flavor I’m not tasting right away is the maple. You have to diligently search for it. The maple is tucked behind the lime. As opposed to other sodas from Hooker Mountain Farm, the maple in this one is very, very faint. This is not a sweet soda, but also not a bitter one. Part of that is obvious at 90 calories a bottle. It’s much closer to a botanical beverage. The spruce and lime work well to form a crisp, earthy drink. Whose taste buds it will please is another story.

Finish: Lime; faint maple; eucalyptus. Dull lime flows into the back of the throat followed at a distance by a thin layer of maple syrup. Eucalyptus is the final flavor you taste, rising off the taste buds like fog on a morning lake.

Rating: If you’ve ever wondered what a liquid Christmas tree tastes like, this is the closest I’ve come to it. Those who enjoy herbal beverages will probably be delighted by this soda. Those who desire something sweeter should probably pass on it. The spruce flavor is up front and abrupt on the first couple sips. It’s hard to prepare for its intensity. The lime you get on the back end of the soda is very refreshing and helps elevate this to a spring and summer drink. We’ve also been told it pairs well with gin. All that aside, this would probably benefit from just a little more sweetness. Perhaps some more maple syrup. I’m just not tasting enough maple for a drink that has the word on its label. It’s probably not going to taste like what you’re expecting. Remember that morning in high school you ran those two miles to kill your hangover, then you got in your car and downed a fourth of your water bottle in an instant? Only you picked the wrong one, and it was leftover vodka from the night before? This isn’t that jarring, but you won’t be prepared for this drink either unless you’re reading this review. Even then, it still may not help. The spruce and lime are solid, but the maple is nearly MIA. We’ll leave this one up to you. If you’re up for an adventure, there’s a bottle of liquid tree from Vermont ready to rock your mouth.