History: Sometimes when researching a soda or a company behind the soda, there’s just not a lot of information to be found. We may have a reviews what we call “in the can,” for months, meaning the tasting and photos are done, but there’s something missing. The reason we don’t publish these reviews is because we’re at a loss on information due to phone calls or emails not being returned and online biographies not being beefy enough for our standards. I’ll tell you what though, there’s really nothing out there on AJ Stephans sodas. What we do know is this: it’s headquartered Fall River, Massachusetts, it’s bottled by the same dude who makes Empire Soda, there’s nine different flavors, and the company was named when the late founder Jeff Rose combined the names of his two daughters. Rose was big on the idea of nostalgia. He said of his sodas, “My product is like going back in time.” Perhaps none of his flavors aside from root beer make that philosophy come to life more than raspberry lime rickey. A lime rickey is the nonalcoholic version of a cocktail called the “Rickey” that dates all the way back to 1903 and is very popular on the east coast. Adding raspberry to it seems like a smart decision to us. It’s like someone said, “Hey Margot Robbie, you look really pretty, but we also want you to wear this push-up bra for your photo shoot.” It’s making a good idea a great one. And I’m all about drinking in good ideas (also very much about Margot Robbie if she’s reading this). 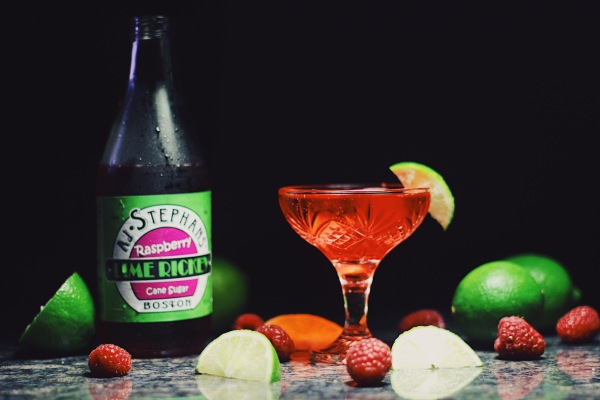 Taste: Candy raspberry; mild lime; syrupy; melted snow cone; sweet. This is hard to pinpoint on flavor. It definitely has an artificial/candy taste to it. Very sweet. There’s kind of a melted down raspberry snow cone flavor with some faint lime notes. They’re subtle, if not a little dull. The raspberry and lime flavors are about 50% each in the soda, so the balance is there. But in this case, I’m not sure it works. It tastes like the raspberry is really about to sink in to your tastes bud, and then all of sudden the lime completely erases it.

Finish: Sweet raspberry encased in a cocoon of lime. Has a really nice lingering effect that is better than the body of the soda.

Rating: AJ Stephans Raspberry Lime Rickey is one of those flavors that sounds good on paper but fizzles in taste. Its taste is defined by sweet, artificial raspberry, reminiscent of a raspberry snow cone. Only, unlike Jackson Hole’s High Mountain Huckleberry (which has a similar melted snow cone flavor), this soda doesn’t have good supporting flavors. The raspberry flavor is too artificial. Still, despite that, it never even gets a chance to unleash its full potential in the mouth [insert porn joke here]. The lime flavor decapitates the raspberry before it gets a chance to showcase its potential. The lime itself is pretty dull. Also artificial. Almost chemical. This soda tastes like wasted potential. I mean, it has redeeming qualities. Decent initial flavor. Solid finish. But somewhere in that crucial middle part, things get hazy. I wanted to like this because raspberry is one of my favorite flavors in the world, but I just can’t. Too syrupy. Too fake. Too little. If you want a soda that takes you down a similar initial path, with much more rewarding results, try the aforementioned High Mountain Huckleberry.