History: “If you put cream or sugar in my coffee, God cries and an angel loses its wings,” Frank Lanzkron-Tamarazo says in a corkscrewed, high-pitched New York accent over the phone. Lanzkron-Tamarazo is a sweet, funny man with a last name almost as long as the conversation we had together. Our time on the phone totaled 54 minutes. Normally our interviews for these reviews clock in at under 15. But Lanzkron-Tamarazo has much to say about his roots, his career, and most importantly, everything coffee. Lanzkron-Tamarazo is a master roaster and founder of Chazzano Coffee in Ferndale, Michigan. But it’s something else that ties all those things in a bow: his religion. He references God often in our conversation, usually in his jokes, though never in a decrying matter. Lanzkron-Tamarazo grew up in New York City with a Jewish mother and an Italian Catholic father before taking his talents to Michigan for a job in a synagogue there. It didn’t work out. But in the meantime, something else was brewing. Sixteen years earlier, his mother-in-law asked Lanzkron-Tamarazo what he wanted for his birthday. The small coffee roaster she gifted him quickly turned into something more. Roasting beans became his nighttime hobby and quickly turned into his full-time obsession. The roasters went from desktop-sized to industrial. The 1o-pound bags turned into 1000-pound bags. “I couldn’t find anyone else’s coffee that was better than mine,” he admits. And don’t get him started on “bad coffee.” He says “it’s against God to do that,” only this time he doesn’t sound like he’s joking. After the synagogue gig didn’t work out, Lanzkron-Tamarazo decided in 2009, “It’s time to do something that will really bring joy to my life.” He now spends more time at his cafe than the synagogue, but in a way, you could say Lanzkron-Tamarazo is at church in some form or another every day because coffee is a religious experience for him. It even influenced the name of the store. Quick story: Lanzkron-Tamarazo is a Cantor, which is the main Torah reader and singer in Jewish synagogues. In Hebrew it’s called a “Chazzan.” So he took the Hebrew spelling, added an “O,” because what Italian word doesn’t end in “O,” and created Chazzano Coffee. This dude gets so worked up talking about the stuff that I’m almost convinced to make the 10-hour drive to try all his varieties.

Being an obsessive, Lanzkron-Tamarazo couldn’t just stop at normal coffee. He needed coffee soda. He grew up around the stuff. His grandmother was a huge fan of Manhattan Special Espresso Soda and it was little Frank’s job to bring it to her. But Lanzkron-Tamarazo wanted his own version. In October of 2015, he introduced his own Brooklyn Born Coffee Soda at Chazzano Coffee. Lanzkron-Tamarazo describes its flavor as tinged with chocolate, nuttiness, and maltiness. When asked specifically which coffees are used in the soda, Lanzkron-Tamarazo is tight-lipped. Brooklyn Born Coffee Soda might be full of flavor, but it’s also notable for what’s not in the recipe. Lanzkron-Tamarazo expands on this, saying it’s a “completely different product than anything on the market because it has no sugar.” That’s right. This is a soda void of one of the genre’s trademark ingredients. And he admits, it won’t be for everyone. “It is a niche beverage. The problem is that there’s no competition for it yet.” The soda also contains no preservatives. As for caffeine content, Chazzano’s Coffee Soda contains about a fourth of the amount of a normal cup of coffee, according to an estimate by Lanzkron-Tamarazo. Carbonated water + coffee = …I don’t know, but it sounds intense.

Where to get: Brooklyn Born Coffee Soda can be purchased directly from Chazzano’s Cafe in Ferndale, Michigan. The company does not sell their soda online, but does take orders for it via email. Find the company’s contact information here.

Nose: Strong roasted coffee smell. Almost like someone brewed a fresh pot and then chilled it.

Taste: Coffee; acidic; dark roast; very mild chocolate; foamy. This’ll put hair on your peaches. Man, the coffee flavor is robust. This is a strong coffee soda. There’s one main flavor and one main flavor only here: powerful roasted coffee beans. Almost a little bit of a nutty flavor with the beans. You won’t taste sugar. You won’t taste many other subtleties like vanilla or creaminess. Coffee. All coffee. And as with most coffee beverages, this is fairly acidic. You can taste the freshness of the beans. Definitely tastes like a dark roast, almost bordering on espresso. If you search hard enough for it, there’s a little bit of a chocolate underbody to the soda. My guess is most won’t taste it. Lots of foam on this soda too. Low on sugar, big on coffee flavor.

Finish: Strong coffee beans with a little bit of earthiness that slowly fades into the background.

Rating: Chazzano coffee soda is definitely a beverage for javahead purists. If you’re a coffee lover or enjoy dry sodas with lots of flavor, definitely bust the cap off one of these. If you enjoy sweeter sodas in the more traditional sense, this will be a hard sell for you because I taste absolutely zero sugar here (because there is none). It’s definitely a niche soda for the reason that it tastes devoid of sugar and b u r s t i n g with intense roasted coffee bean taste. No sugar. No carbs. No calories. This is literally just carbonated water and coffee. I think no matter what, this soda is a sipper. Put on your fedora, open up your laptop, and watch the beautiful head on this form as your pour one out into your glass. Sip slowly at your favorite hipster cafe as you wax melodramatic about your first world problems. Bottom line is this: this is strong. Strong coffee. Coffee strong. Get it? If you’re into that, go far it. If not, pass. Simple as that. Personally, I think the roasted coffee flavor is great, but I also think it needs some supporting flavor. Maybe a sweeter nuttiness, maybe vanilla. But more than anything, it needs a little sugar. I think even with 20 grams of sugar, this could appeal to a wider audience. I get that this soda is a love letter to coffee enthusiasts. I just think maybe they should offer one that’s a little sweeter. Still, it earns major points for its flavor. Chazzano Coffee Soda is definitely one that will make you say “wow!” but the reasoning behind the exclamation is sure to be divided.

History: Let me tell you about a company whose namesake dates back to 6000 BC. Gives a whole new meaning to the word “retro,’ huh? “We’re the oldest bottling plant in the country,” says Simpson Spring co-owner and marketing head Chris Bertarelli. The spring itself is what’s ancient. The South Easton, Massachusetts company actually started up in 1878. The bottling plant is built around the spring, meaning the spring is literally in the building. After Sam Simpson acquired and farmed the land where the spring is located for 50 years, he was convinced by his grandson, Fred Howard, to sell him five acres around his property. According to Bertarelli, Howard was a bit… uhh, weird. But if it was for his eccentricities, Simpson Spring Soda might not exist. It was Howard who started experimenting with carbonating the spring water and adding flavor to it. The coffee soda we review today is still the original recipe made with real coffee and was one of the first flavors in company history. Bertarelli was uncertain about the exact date of when the company began producing soda, but notes the year on the recipe book is dated 1919. The only difference between the original sodas of now and then is that today’s versions contain pure cane sugar instead of syrup. The first incantation of Simpson Spring Coffee Soda was called “Spar Coffee.’ People would add cream and sugar… and scotch. Because nothing says starting your morning like getting hammered and stumbling through bacon and eggs. Another fun fact about the coffee soda: in 1930 it was sent down to Manhattan and sold in Macy’s department stores. Eventually, Fred Howard left the company to pursue the “dustless duster.” Bertarelli and her husband took the business over in 1988 and continue to run the historic, yet small operation. At the end of the day, it’s all about the spring. Says Bertarelli, “Soda is a 90% water and we’re using a spring water that has no chemicals added to the water and it’s in glass.” We’ve heard this is a love-it or hate-it soda, and it’s our job to tell you which side to believe.

Where to get: You can purchase Simpson Spring Coffee Soda online at Summit City Soda. 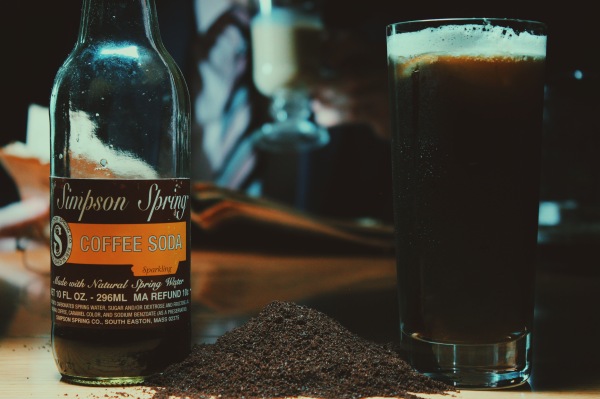 Taste: Dark roast; tartness; cane sugar. The coffee taste is immediate followed by an acidic bite. The bite is a little harsh and takes time to adjust to throughout the drink. The coffee flavor tastes a little watered down. You can really taste the water. The cane sugar helps supplant it a little but, but the tartness in this soda really cuts the sugar. The flavors are simple, but not in balance.

Finish: Dark roast with the volume turned down along with some caramel notes and tartness. Pretty similar to the body of the soda.

Rating: Coffee sodas are their own animal because of the wide variety of flavor options available. Do you want mocha java? Maybe Irish Cream? How about some wild Columbian blend infused with spices? This is what makes some of the great coffee sodas some of the best craft sodas, period. But this is still soda we’re talking about, and soda has three main elements: carbonated water, a sweetener, and the ingredients used to impart the soda’s intended flavor. With Simpson Spring’s Coffee Soda, the company has blended these three elements in a way that leaves an imbalanced flavor profile. The flavor of dark roasted coffee is nice, but it’s a ghost of what it could be and is too watered down and not sweet enough. There’s also a tartness to this that seems out of place. Coffee is an acidic drink in general, but especially so in this soda. It’s a sensation that makes your face wrinkle. It’s like every time I remember the guy my sister married. What a great stepbrother. I’d prefer to have seen the coffee flavor shine more boldy with less water used. Fans of coffee drinks should certainly still give this a try. But if you’re on the fence about it, unless you’re cool with acidic coffee, you’re better served to try another coffee soda. I wanted to like this, and I know it has a fan base, but our team isn’t sold.