History: “Dear spice lovers – this one’s for you” is the message you’re greeted with on Dry Sparkling’s four-pack of Serrano Pepper soda. I know what you’re thinking. How did we get here? Is craft soda really heading this direction? Pepper soda? I can’t say we disagree with you. So we had to ask Dry Sparkling a few questions about their seasonal Serrano Pepper soda. Founder and CEO Sharell Klaus says “We really wanted to create something unexpectedly delicious! No other beverages out there specifically celebrate the taste of spicy peppers, so we set out to do just that.” Not only was this beverage created to be a refreshing take on pepper (it’s hard to even write that and understand it), it was formulated to pair with summer foods like BBQ and Cuban sandwiches. Klaus and her company have always been different. She says “I believe we’re creating a new category of soda.” Founded in 2005 in Seattle, Washington, the company boasts atypical flavors like Juniper Berry, Lavender, and Fuji Apple. That’s not the only unique aspect of Dry Sparkling. Each flavor contains less than 100 calories. Every bottle of soda is clear. And every recipe is made with only four ingredients: carbonated water, cane sugar, natural flavors, and phosphoric acid. For the summer of 2016, they cranked out two seasonal flavors: the one this review is about (if you’re like my girlfriend and just skimming this as I look over your shoulder for approval, it’s Serrano Pepper) and Malali Watermelon. Klaus expands on the former, saying “With Serrano Pepper DRY, you get these very intriguing savory and green, yet balanced notes, plus a touch of spice. We aimed for it to have a kick, but still be refreshing. Like spicy peppers themselves, some bottles of Serrano Pepper DRY are hotter than others due to the natural pepper emulsion that flavors each batch.” I think it’s safe to say, this is a soda for the adventurous. It’s a soda designed to appeal to the more culinary-inclined, a demographic to which Dry Sparkling caters. Klaus says the tastes of Dry’s target audience are more “artisan” in nature and that their drinks are “more of an elevated experience.” Translation: we make fancy shit. And if you’re here, you’re probably a part of the demographic who appreciates that. In her own words, Klaus sums up her company as “The new age warriors of soda.”

Where to get: Dry Sparkling is distributed across the U.S. You can find it in stores like Whole Foods and Target, among others, but the best way to find the retailer nearest you is to use the company’s online soda locator. For a full list of stores that carry Dry Serrano Pepper, click here. 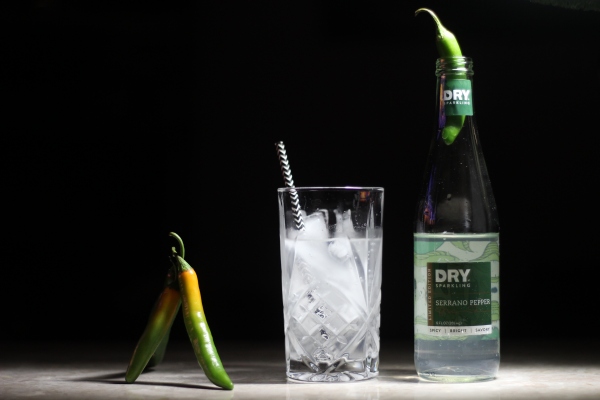 Nose: A subdued pepper smell. Imagine pulling a pepper out of the fridge and then cutting it open. The cold from the refrigerator will slightly dull the pepper’s strong aromas. That’s what I’m getting here. Definitely Serrano/green pepper, just subtle.

Taste: Refreshing; green pepper; brisk carbonation; crisp. For a soda that bases its flavor on a pepper, this is surprisingly very drinkable. Not overwhelming at all. It’s kind of like drinking a flavored tonic, infused with the crisp carbonation of a lemon-lime soda (without the lemon-lime flavor). The pepper really comes through. It’s nice and mild. Not particularly spicy. Anyone should be able to handle this. The initial sip has a savory characteristic from the pepper, and as it fades you taste just a hint of sweetness near the end. I think you’ll be surprised just how brisk and light this drinks.

Finish: Definitely not as strong as the initial sip. Bubbles continue to dance along your tongue as the soda’s sugar briefly reveals itself before going back into hiding.

Rating: Dry Sparkling Serrano Pepper is one of the most surprising sodas you’ll drink. Coming in, I expected something harsh and abrasive. I mean, it says on the label “spicy” and “savory.” Those aren’t exactly typical qualities of a soda. But I wouldn’t call this a spicy soda, rather it’s more refreshing and crisp than anything else. The pepper flavor is strongest on the initial sip before quickly fading in favor of mild sweetness. It drinks like a pepper-flavored tonic. Savory, then slightly sweet. Like my ex. But overall, this is very mild and drinkable, and these are the two characteristics that make Dry Serrano Pepper work as a beverage. I hesitate to say this is a soda for only the adventurous because I really do think more than just a fraction of soda drinker would like this. That said, it’s still pepper soda. The idea alone will be enough to scare many away. And if you’re not a pepper fan, I wouldn’t travel down this road. When I first started drinking this, I thought I’d rate this three stars, but by the end it’s clear that would be too low. Just the fact that I could get through an entire pepper soda and enjoy it says something about the craftsmanship of Dry Sparkling. Get Serrano Pepper while it lasts. It’s only here until August 2016.