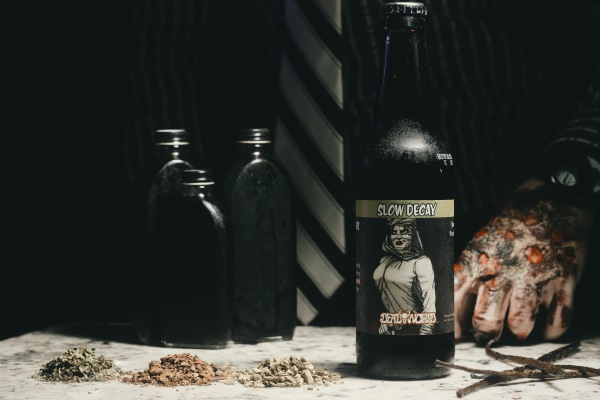 History: Comic books have been inspiring movies and video games for decades. Now they’ve conquered soda. The one we’re referring to here is the zombie-centric comic, Deadworld. It’s allegedly the longest-running zombie comic book in the world. Gary Reed, the comics’ main writer, has parlayed the success of Deadworld into t-shirts and trading cards. And now Caprice Brands and Reed have teamed up to bring Deadworld to soda. Launched in February of 2015, Deadworld Sodas out of Livonia, Michigan feature zombie-influenced flavors and characters from the comics on the labels. Caprice Brands Retail Marketing Manager, Janelle Powers, tells us each flavor has four different labels. Blah, blah, blah – collect them all – blah, blah, blah. Listen, I already know what you’re thinking. You think this is a gimmick. You think this is a novelty soda because it’s associated with zombies. We asked Powers about that, warning her that those suspicions will pop up in the minds of craft soda connoisseurs. She responded by saying, “We’re not out to just throw out some cheap soda,” and continued by adding that “If you have a good brand with a crappy product, you’re not going to go far.” Deadworld Soda comes in 12 flavors with names like “Zeek Cocktail” and “Goon Bitters,” among them. The company’s most popular flavor is its “Twilight Shuffler Root Beer,” followed closely by today’s review, “Slow Decay Vanilla Root Beer.” Power describes the flavor profile, saying “You guys will definitely taste the vanilla in it. It just has a nice, creamy texture to it.” She notes the brand gets a great response from kids, but is quick to point out Deadworld Soda is for all age groups. Powers tells us the brand is bringing an onslaught of more creepy sodas to stores. “Voodoo zombies, zombie monkeys; anything you can possibly think of,” she boasts. Zombie monkeys, man – just what the world needs. Get ’em before they’re gone and then… come back again.

Where to get: You can purchase Slow Decay Vanilla Root Beer online at the company’s website or from YummiCo.

Nose: A very sugary candy vanilla scent. Reminds me of Brach’s Vanilla Milk Maid candies that you’d used to see in the grocery store. Also very similar to Vanilla Tootsie Rolls. Vanilla sugar rush. Bath and Body Works is already thinking of ways to make this scent into a soap.

Taste: Sugar; sweet vanilla candy; light mint. You taste frothy carbonation followed by a rapid sugar rush of sweet candied vanilla. This is quickly followed up by a bite that tastes of birch and mild mint. The bite provides a temporary break from the vanilla, but the sweetness comes right back near the end of the sip. This punches you in the mouth with vanilla sugar.

Finish: Sweet vanilla that has some mild creaminess mixed with light wintergreen.

Rating: There’s nothing gradual about Slow Decay Vanilla Root Beer – this soda rapidly crashes into your tongue with a tidal wave of strong, sugary vanilla. It’s not creamy, but it is sweet. It’s powerful. Borderline decadent. It may even overwhelm some people….. sorry, I was having flash backs to an ex-girlfriend with a very similar description. Where Slow Decay shines is its bite – for a sweet soda, it’s got a pretty crisp bite. It really helps reign in some of that sweetness with contrasting birch oil and mint flavors. I think Slow Decay probably needs to add a little bit of spice or perhaps just cut back on the sugar levels to really appeal to craft root beer enthusiasts. But here’s the deal: there’s a zombie on the label. Zombies are hot right now. The soda’s brand is called Deadworld. Translation: kids will want this. And kids will love this. They’ll drink all that sugar up, do fifteen cartwheels, run five laps around the house, and then play video games for two hours. And then they’ll want another. For the rest of us, it’s still fun. It’d be great for a theme party. There’s a reason we reviewed it during the week of Halloween. Root beer enthusiasts will probably want to check it out because it is different than the norm. For everybody else, I’d say it’s a toss up. How much are you willing to challenge your pancreas?